Advertisement
The Newspaper for the Future of Miami
Connect with us:
Front Page » Top Stories » 5G, touted at Super bowl, gaining ground in Miami-Dade 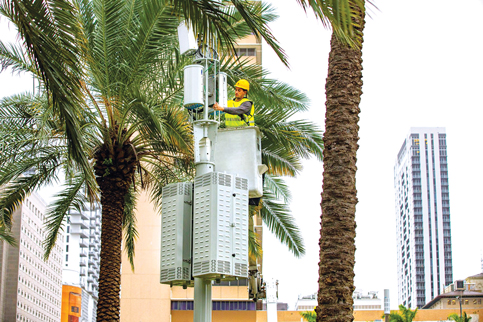 It was touted early in the broadcast Sunday to an estimated 102 million viewers: Super Bowl LIV marked the first occasion – and Hard Rock Stadium stood as the first location – where the big game was held in a fully 5G-enabled venue.

Elsewhere around Miami-Dade County, however, the availability of the much-anticipated technology has varied depending on the provider.

Fifth-generation wireless technology – 5G for short – will be capable of data transfer speeds about 20 times faster than 4G once it’s fully operational. As such, consumer hype around the burgeoning tech is high, and telecommunications companies are moving strategically to roll out the tech.

The good news for T-Mobile customers in Miami-Dade, according to Tony McDowell, the company’s senior director of network engineering, is that 5G is already here and widely available.

T-Mobile users enjoyed “the biggest 5G network in Miami” before Super Bowl LIV, and in anticipation of the event, the telecom “amped [its] 5G by adding millimeter wave (mmWave) in places like Hard Rock Stadium and Bayfront Park,” he said in an email Monday.

Millimeter wave, which the Federal Communications Commission designates as “high-band” and capable of carrying data speeds of over 1 gigabytes per second – about 10 times faster than 4G LTE, the most advanced 4G technology – is also being used, along with other delivery modes, by AT&T and Verizon.

“Unlike Verizon, who is dependent on small cells for 5G, we use a combination of traditional towers and smaller cell sites,” Mr. McDowell said.

For small cells it does install here, he continued, T-Mobile is collocating as many as possible on existing structures alongside those from other telecoms.

“We’ll continue to add to our 5G network over the next few years by adding additional macro sites, mid cells and smalls where customers will benefit from additional capacity,” he said.

Though their shapes vary, small cells are about the size of a shoebox and can be placed on streetlights and telephone poles, among other common structures.

Mr. McDowell declined to specify how many 5G-capable small cells T-Mobile has installed so far within the county.

However, a side-by-side map comparison of 5G coverage by T-Mobile and Verizon on the company’s website shows T-Mobile’s network covering all of Miami-Dade, while Verizon’s is concentrated on four locations: Miami International Airport, downtown Miami, Hard Rock Stadium and Fort Lauderdale-Hollywood International Airport.

A map of 5G coverage on Verizon’s website confirms that the preponderance of its coverage in Greater Miami remains 4G LTE with concentrated 5G Ultra Wideband at those locations.

AT&T’s map on its website similarly shows complete 4G LTE coverage in Miami-Dade but does not include 5G coverage indicators.

Sprint, meanwhile, has been steadily upgrading its existing network over the past two or so years to add further speed and capacity while placing 5G tech in select locations, said Shannon Nichols, director of site development.

Typical cell site equipment has only eight receivers and eight transmitters, she said. Conversely, Massive MIMOs (short for “multiple input, multiple output”) have eight times as many of each within a single unit capable of handling both 4G and 5G services.

“Our Massive MIMO operates in the 2.5 megahertz spectrum band, a very big asset for Sprint from a spectrum perspective,” she said. “That’s different than many of the other carriers who are operating 5G in a different way [because] it allows greater capacity and efficiency in a spectrum, and we’re excited to use that throughout the country for 5G and enhanced 4G.”

While much of Sprint’s 5G focus in advance of Super Bowl LIV was on Hard Rock Stadium and some 30 other “priority venue areas” across the Miami metropolitan area, she said 5G is being brought up “all over” Miami-Dade, Broward and Palm Beach counties by way of 250 or so small cells.

“Those upgrades are permanent,” she said. “Some are collocated on existing power and telephone poles. Some have been new poles, and some are collocated with other carriers – purpose-built poles. We have a variety of deployment styles. We prefer to collocate.”

At the moment, she said, it isn’t possible to determine the total number of small cells needed to cover all of Miami-Dade.

“I don’t think that number exists, really, and I don’t think we’ve tried to cover the entirety of Miami with small cells,” she said. “The small cells are used to fill in where we have a gap in capacity demand, so it’s more organic than that. There’s not a fixed plan.”

Having no fixed installation plan requires more flexibility than local governments normally afford private companies operating in the public space. Fortunately for companies like T-Mobile, Sprint, Verizon and AT&T, among many others, the Florida Legislature last year significantly hemmed the ability local governments have in regulating what and where the tech could be installed within their borders.

In June, Gov. Ron DeSantis signed into law SB 1000, one of two similar bills filed by Sen. Travis Hutson of St. Augustine and Rep. Jason Fischer of Jacksonville that preempted local jurisdiction over the installation of telecommunications equipment in public rights-of-way.

The bill also reduced by 1% the state’s communications service tax and direct-to-home satellite service tax. Together, the cutbacks represent a potential $128 million in savings per year for Floridians, according to nonprofit research group Florida TaxWatch.

The legislation was the latest in a series of laws from Tallahassee in the past two-plus years that supersede county and municipal authority over such matters.

Right around when the governor ratified SB 1000, Miami-Dade commissioners OK’d several applications by telecom companies to install 5G small cells throughout the county. The companies, in exchange, agreed to pay $150 yearly per small cell attachment on county property – the maximum per-pole charge permitted under the new state law.

Communities in the state have pushed back on what they argue is a growing trend of infringement on local home-rule powers and illegal appropriation of public property.

The Florida League of Cities, of which Miami-Dade cities are members, filed a renewed constitutional challenge over a prior law dealing with wireless technology, the News Service of Florida reported in August.

Two months later, in what amounted to a symbolic gesture, Miami-Dade commissioners passed a resolution urging state lawmakers to repeal their own legislation to curb the actions of telecoms operating “with little regard to the disruption their work imposes on … businesses and residents.”

But neither state legislative chamber so far has exhibited any significant motion indicating a reversal of the law is coming.