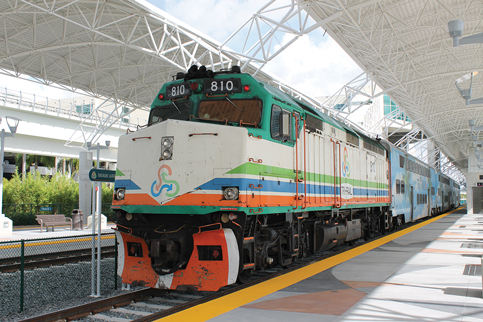 After months of planning, Miami-Dade transit officials on Friday announced a single mass transit pass linking from West Palm Beach to the Upper Florida Keys – but only for the Super Bowl. The pass program is to disappear again immediately after Sunday’s game.

Passes are activated as soon as they’re purchased and end at 2 a.m. the following day.

“Our goal is to enable a seamless public transportation experience, which is why our promotional regional pass with Tri-Rail will be an added benefit during this time,” said Alice Bravo, who directs Miami-Dade’s transportation and public works efforts. “We want to make sure people can easily transfer from one system to another without having to worry about buying different passes.”

Last summer, county commissioners directed Mayor Carlos Giménez or his designee to work with Broward and Palm Beach counties to accelerate creation of a tri-county pass before the Super Bowl. Commissioner Esteban L. Bovo Jr. was the key sponsor of the resolution to create the regional transit pass in time for the Super Bowl, with Commissioners Eileen Higgins and Jean Monestime as co-sponsors.

The pass that had been envisioned would allow riders engaging in Super Bowl festivities to pay a single fare and multiple modes of transportation across the three counties.

The idea of a permanent tri-county transit pass format, not just for a single event, has been in the works awhile. Broward County Transit and Palm Tran have been working with Miami-Dade County and the South Florida Regional Transportation Authority for years to create a regional pass, though Broward and Palm Beach counties’ transit organizations are not involved in this Super Bowl pass program.

Recently, the South Florida Regional Transportation Authority raised Tri-Rail fares. The first price bump in more than a decade, the full-price monthly pass will cost $110, up from $100.

To get the GO Miami-Dade app and purchase the special Super Bowl period transit pass, the app can be downloaded free from the App Store or Google Play.

Miami-Dade did not explain why the pass program will disappear after the bowl game.