Advertisement
The Newspaper for the Future of Miami
Connect with us:
Front Page » Real Estate » Miami land swap for city administration building may collapse 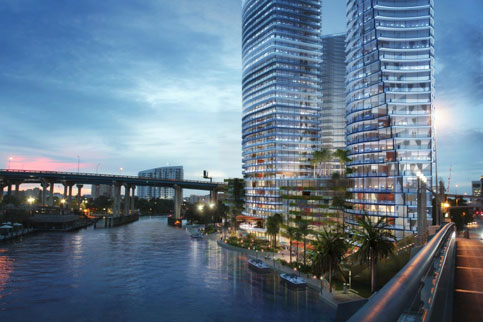 The Miami City Commission deferred a rezoning for the city’s riverside offices site linked with its lease to a developer in exchange for a new municipal administration building nearby, with discussion portending a possible collapse of the complex deal.

Commissioners last week indefinitely deferred the rezoning and land use change, following a request from the city administration. However, two commissioners voiced disapproval of the two items and the overall deal, while Commissioner Ken Russell suggested that striking down the rezoning could make the city vulnerable to a lawsuit.

“If there is a majority will of this body to kill the deal, which there may be, there are repercussions to that.” Mr. Russell said.

“I’d rather see it deferred,” he said, “so I can study the legal ramifications to see if we have exposure for undermining the zoning issue on land that we’ve already leased as part of this entire structure.”

Back in 2018, 64% of Miami voters agreed to allow the city to sign a 99-year lease with an option to sell the site at 444 SW Second Ave. to developer Lancelot Miami River LLC, an affiliate of The Adler Group. The developer would build the city a new administration building, with city officials having declared back in 2015 that the current administrative hub on the lease site is functionally obsolete and needs to be replaced.

Last June, commissioners voted 3-2 to use taxable special obligation bonds, or any other financing advantageous to the city, with the expected maximum principal of $150 million for the new administration building and related parking at 230 SW Third St. According to city staff, the bond would be offset by $3.62 million annual rent from Lancelot. The ballot referendum didn’t mention bonds. Commissioners Manolo Reyes and Joe Carollo voted against the special obligation bonds.

The rezoning and land use change would be the first vote for new Commissioner Alex Diaz de la Portilla pertaining to the Lancelot Miami River LLC agreement. While Mr. Diaz de la Portilla raised questions, he didn’t state whether he favors the agreement with the developer.

Fernando Casamayor, assistant city manager, said issues with the land because a main power line for FPL runs through the property could affect the new building’s design and development.

“None of the reasons for deferment were expressed by the proponent of this zoning change,” Commissioner Reyes said of the December deferral. “I deferred it in order to be fair because we didn’t have a full commission… I stated clearly, ‘I’m going to vote no, but just to be fair with the developers that they want a full commission, I will defer this.’”

Commissioner Joe Carollo was also critical of the deal, calling it the biggest giveaway in the city’s history other than the Marlins Stadium deal.