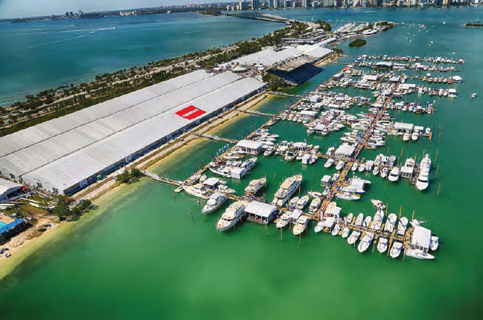 There remain serious concerns among those supporting restoration of Miami Marine Stadium that the millions of dollars going into rebuilding it may be wasted if the Miami International Boat Show continues to control the city-owned property in the peak tourist season.

The boat show is held in mid-February on Virginia Key, under a license agreement between the City of Miami and the National Marine Manufacturers Association (NMMA).

Members of the Virginia Key Advisory Board continue to be critical of the boat show monopolizing the site around the idled stadium from December through March.

The latest contentious discussion between board members and Larry Berryman, boat show director, unfolded at the board’s Jan. 21 meeting.

The discussion began after board member Vinson Richter summarized a Jan. 10 letter he wrote to fellow board members expressing shock and frustration over the boat show’s apparent unwillingness to shrink the time it ropes off the site.

For his part, Mr. Berryman continued to defend the NMMA, said it is doing the best it can to shave days off the set-up and tear-down, and repeated a promise to work with the city to resolve the issue.

“I am particularly disturbed by NMMA’s response … regarding the time it takes to set up and take down the show,” Mr. Richter wrote. “…this issue has been one of the major topics of discussion by our board since its inception. I believe the [board] has been consistent that a 3.5 month put up / take down schedule from Dec. 1 through March 15 – the prime months of the season – is unacceptable and in direct conflict with the envisioned event and operations schedule for a restored Miami Marine Stadium.”

He continued: “And, disappointingly, instead of opening a discussion as to how the NMMA might reduce that timeline, it has doubled down on a resolve to memorialize that problematic schedule.”

The city owns much of the island, along with the waterfront stadium, idled since 1992’s Hurricane Andrew.

The city has numerous projects underway on the island that are expected to impact each other, from restoration of the stadium to improvements to the flex park acreage that hugs the stadium.

The boat show has used the flex park area and the historic basin since its 2016 event.

Mr. Richter said he visited the property around Jan. 2 and was expecting to see very little had been done.

“And I was shocked, because all of the tents were pretty much up, in 30 days. And I said wow, I was expecting to not see anything. But what I saw was that all the tents were up, pretty much, in 30 days,” he said, again questioning the long time period the NMMA locks up the site.

“And so that was the point of the letter; why isn’t the boat show trying to compress the schedule instead of taking all of the time that they want? And if that’s the way it’s going to be, then the city should charge more rent, or look for other alternatives. That’s just my opinion,” said Mr. Richter.

His letter concludes this way: “As I have stated many times before, there’s a ‘train wreck’ coming: a conflict between the operations of the Miami Marine Stadium and the Boat Show. As much as I love the Boat Show and its operator, it’s time for NMMA to recognize its obligations under the lease and to take this issue seriously. If not, perhaps the City of Miami would be better served to explore other alternatives.”

Mr. Berryman responded, “We’re looking at ways to compress our time… We did start our build later this year and hope we can shave off some time on the breakdown as well. But again, to build a world-class event starting from scratch and turning it into something special does take a significant amount of time. Have we been able to shave time off that, yes. Has it been 30 days, no.”

He added, “I understand the issue… we’re doing everything that we can to compress that timeframe.”

Board member Lynn Lewis said city staff has defended the NMMA, saying the organization has assured the city it is doing the best it can.

“We’ve got a job to do, which is to do the best we can to make this wonderful spot available to the public who own it,” Ms. Lewis said. “And so assurances and good faith are great but there’ve got to be metrics that measure, wherein the city says, ‘we hear you, you’re assuring us but yes, we agree, it can’t be better or it can be better and this is how.’”

She added, “… this is public property and I wish there had been, or would start to be, an obvious recognition that every day that NMMA has site control to the exclusion of the public could be considered, and would be considered by some people on this board, as a breech or a dereliction of the public trust for public park property, and I’d like to see a greater, obvious acknowledgment of that.”

A couple of board members said they agreed with Mr. Richter and Ms. Lewis, including Peter Ehrlich.

“I really think the boat show needs to figure out a way to shorten the setup and takedown,” Mr. Ehrlich said.

Board Chair Joe Rasco asked Mr. Berryman about what the NMMA plans when construction begins to restore the stadium.

Mr. Berryman answered: “Once projects get going, we’ll be mindful of how we can work together… for marine stadium, which is a piece of it. I’m quite certain we can find a path to construction that can be continued while the show is open.”

Don Worth, a Miami Beach resident and longtime supporter of stadium restoration, said: “You can’t spend $45 million and have one of the greatest open-air venues in the world closed most of peak season. It doesn’t work.”