Advertisement
The Newspaper for the Future of Miami
Connect with us:
Front Page » Government » Miami Beach kaleidoscopic bridge inches toward reality 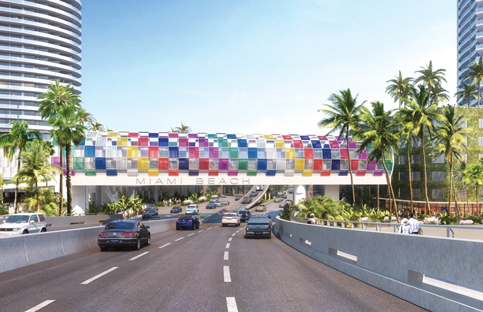 For Miami Beach, a development that’ll lead to a kaleidoscopic bridge to welcome those coming in and out of the city, a 3-acre park with residency features and a 519-foot tower of 330 residential units is inching toward reality.

The Miami Beach commission unanimously approved on first reading the second amendment to its agreement with the developers behind the Park on Fifth project, to rise in the 500 to 700 blocks of Alton Road. If it receives final approval, the revised agreement would see the developers expedite the completion date for the park that is to be conveyed to the city, as well agreeing to more funding for the park and bridge.

David Martin’s Terra Group and Russell Galbut’s Crescent Heights united for the proposed Park on Fifth project. Along with the bridge and the park, the project would feature a 519-foot residential tower and retail pavilion. As noted in a city memo, the proposed second amendment agreement will reduce the existing permitted 410 residential units to 330.

The park, which was to be completed by February 2027, could now be finished as early June 1, 2023, under the proposed second amendment agreement. The park would have to be finished within the earlier of either 36 months of issuance of the full building permit or 48 months from the date of execution of the second amendment, with a closing outside date projected for June 1.

The proposed amended agreement would also include specific sustainability and resiliency elements requested by the city administration. The developer, which is to pay for the project, would agree to spend a minimum of $8 million for the park.

The terms for the Miami Beach Canopy, the bridge designed by French artist Daniel Buren that’s to welcome drivers entering the city who make their way over the MacArthur Causeway, would also change. Under the prior agreement, the city was to shoulder a maximum contribution of $9.25 million and a city contingency of $360,000. That’ll change to $9,610,000 with no contingency. The developer would be responsible for the rest of the cost, with a new projected budget of more than $12.4 million.

Under the current agreement, if the bridge budget, now at $10 million, is exceeded, the developer would have the right to a value engineer, either contribute additional funds or seek additional funds from the city, or terminate the first amendment. Under the proposed second amendment, the developer would be responsible for all additional costs of the project, whether or not the project exceeds the proposed budget of $12.4 million.

Mr. Martin said the bridge is targeted to be done in two years, though a series of utility conflicts with the bridge must be solved.

Among thornier issues of the second amendment is for the commission to reach a settlement with the developer regarding a recent Board of Adjustments order in which the board sided with the developer. The developer successfully appealed to the board that the city’s historic calculation of floor area ratio should not include stairwells, stairways, elevator shafts and mechanical areas.

If approved, the developer would be allowed to act according to the board’s order. The commission is to vote on a clarifying amendment to the city’s floor area calculation.

Several pending issues are expected to be resolved between first and second reading, which is scheduled for Feb. 12. While the amendment denotes $8 million proposed for the park, the amount is to be updated considering additional elements the developers agreed to provide, such as a cistern and upgraded fitness equipment. The administration would also like a designated portion of the park completed by the end of 2020 and a security to be provided as well.

The city is also seeking $250,000 in reimbursements of its costs for the board of adjustments dispute and the second amendment, of which the developer currently has only agreed to pay half.

At the end of the discussion, Mr. Galbut said he was happy with what had gone on that day, commending neighbors who participated in many meetings and gave input. He added that he and his team on the project had not sought added floor area ratio, but rather additional height.

“We are at the cusp of doing something great,” he said.

Mayor Dan Gelber and commissioners were enthusiastic to see negotiations moving along, with eagerness for the park and bridge to continue progressing. The bridge will play a part in the city’s Baywalk and the park is to serve nearby residents.

“No one in that area has a backyard,” Mr. Gelber said. “And now they are going to have a common backyard.”