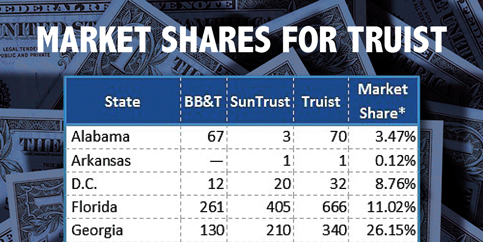 Further evolution in the banking industry is occurring, nationally and right here at home, with mergers and rebranding impacting the financial market.

As a byproduct of the consolidation many consumers are waking up to discover they have a new financial institution, and not by their own choice, according to BauerFinancial Inc., the Coral Gables-based independent bank and credit union rating firm.

In its report titled “What a Difference a Decade Makes,” the firm notes that 10 years ago the combined US bank and credit union industries boasted more than 16,000 institutions, and only about 40% of them earned Bauer’s highest (5-Star) rating. Hundreds of failures and thousands of mergers have transpired since, bringing the system of federally insured depository institutions down to only about 10,000.

While they may lack the quantity they once had, the vast majority of today’s banks and credit unions are quite strong, says Bauer.

Several banks operating in South Florida are going through rebranding with new names, as a result of internal changes or mergers. Examples are SunTrust and BB&T merging under a new name, Truist Bank.

“The main reason for these name changes is the increased level of M&A [mergers and acquisitions] activity we have been witnessing in the financial sector in the last few years,” said banking expert Kenneth H. Thomas, president of Miami-based Community Development Fund Advisors, in an email to Miami Today.

“Banks have benefited from the continually growing economy, reduced regulations, tax cuts, and other factors increasing their value and encouraging many of them to sell at favorable prices,” he wrote.

Also, the increased competition from the megabanks like JP Morgan Chase and non-banks like Quicken Mortgage and especially the emerging FinTechs have encouraged many banks to seek “mergers of equals” to compete more effectively, according to Dr. Thomas.

“This was the case with the BB&T + SunTrust = Truist deal nationally and the Professional + Marquis Banks locally. Sometimes the merger of equals will keep the name of one of the banks (e.g., Professional) but more often than not they agree on a totally new name as was the case for Truist,” he wrote.

Bank mergers and acquisitions at this stage of the current expansion cycle are triggered by improving financial performance and prospects of sustainable growth in Florida’s economy, said Manuel Lasaga, president of StratInfo, a Miami-based economics and finance consulting firm, in an email to Miami Today.

“To tap these growth opportunities in an already competitive market, some of the mergers are motivated by the need to grow faster, by buying or merging with another bank, than if the banks relied on their own organic growth, meaning their internally generated profits,” he said.

At the same time, Dr. Lasaga noted, out-of-state banks have been picking good profitable banks to gain a foothold in the attractive Florida market or to capture a more meaningful presence in the market.

Bauer recommends all 5-Stars and 4-Star rated institutions, and there are plenty to select from. In fact, those rated 2-Stars or below, at the other end of the spectrum, currently account for less than 2% of the total, the firm reports.

“Even after divesting 30 branches and $2.4 billion in associated deposits (to satisfy anti-trust concerns), the combined holding company, Truist Financial Corp., will control roughly $450 billion in assets planting it securely among the top 10 holding companies by asset size in the nation. The branch divestitures are reportedly concentrated in Georgia, North Carolina and Virginia,” the report noted.

Dr. Lasaga said community banks have also been courting acquirers given their improving financials in recent years, after the grueling workouts and losses during the Great Recession that resulted in orders from regulators for their shareholders to increase the banks’ capital.

“The original investors may not now have the deep pockets of additional capital needed to take their bank to the next level,” he wrote.

Dr. Thomas noted another reason for a name change is the increased focus on digital banking and other technology advances in banking that customers have wholeheartedly adopted.

“Many banks want their existing and hopefully new customers to perceive their banks as technologically savvy and up to date vs. a stodgy old conservative image, and a rebranding can help meet that objective.

“Finally, a bank may rebrand itself simply because its name was sullied and associated with poor customer service and other problems,” Dr. Thomas said.

“This is exactly what happened when First Union Bank, one of the nation’s largest, grew so rapidly with mergers that customer service suffered. This came to a head when they bought Philadelphia’s storied ‘Core States Bank,’ which traced its roots to the nation’s first commercial bank.”

Mr. Thomas said First Union’s customer service was so poor in Philadelphia that it became known as the “FU Bank.”

“To their credit, they realized this problem and took the unusual step of rebranding by adopting the name of a smaller bank they bought (Wachovia), and gradually improved customer service to become one of the top-rated consumer friendly banks in the nation.

“Wachovia was bought by Wells Fargo which is now having similar customer service issues, even worse than First Union,” Dr. Thomas wrote, “and for that reason I have been the sole voice calling for them to rebrand themselves.”