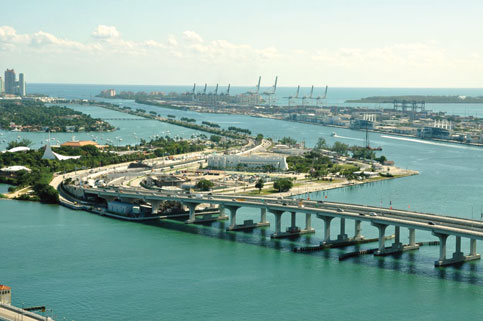 While Miami-Dade County may soon firm up a Miami Beach to downtown transit link, Miami Beach officials aren’t sold yet.

As part the 2016 Smart Plan, the county has been determining preferred transit for six corridors.

At the end of January, the Transportation Planning Organization (TPO) Governing Board is to vote on the locally preferred Beach Corridor mode. Miami Beach Mayor Dan Gelber, a voting member of the board, and city commissioners weighed in on the plan.

While the TPO isn’t to vote on the corridor’s specific Miami stop, discussion revolved around the two pinpointed choices: Maurice A. Ferre Park, formerly Museum Park, or One Herald Plaza. The plaza is owned by Malaysian casino owner Genting, which proposed a monorail for the Beach Corridor.

Mayor Gelber said that whether transit goes to Herald Plaza or Ferre Park is important to Beach residents, with a park stop potentially offering one-seat connection from the Beach to Government Center. Beach officials have opposed gambling establishments in connection with the Beach Corridor.

Consulting firm InfraStrategies, on behalf of the city, evaluated the county’s studies on the Beach Corridor. Managing Principal Jeffrey Boothe said that while light rail/streetcar was originally recommended because it would be better for ridership and could be expanded up the Beach, the option isn’t feasible. His firm recommended a one-stop people mover connecting Government Center and Washington Avenue at Fifth Street.

Responding to Mr. Gelber’s question why the vote is this month, Ms. Bravo said the county commission directed her to move all Smart Plan projects as “quickly as humanly possible” so the county can seek federal funds to take advantage of current elected leverage over federal transit funding. Mr. Gelber said he might ask to defer the vote a month to get more community input.

“I want to make sure I’m only voting on something I’m conformable with and the city, more importantly, feels comfortable with,” he said.

Commissioner Mark Samuelian emphasized a need for an integrated solution to address not just the Beach Corridor line but transportation tied to it. Mrs. Bravo said the county would provide additional resources; the study recommended a bus or trolley in dedicated lanes from Washington Avenue to the Miami Beach Convention Center.

“I don’t know where we’re going to go with this,” he said, “but I really challenge us to make a decision on this and to finally see Baylink, or whatever we are going to call it, all the way through, because we need this.”