Advertisement
The Newspaper for the Future of Miami
Connect with us:
Front Page » Top Stories » Tri-county transit pass may take field for Super Bowl 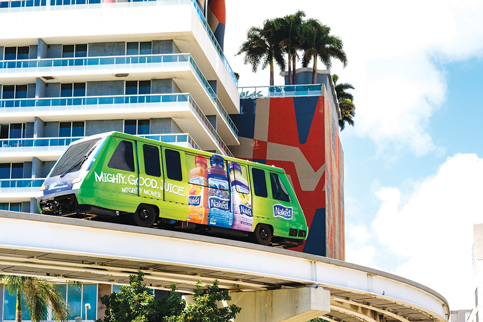 At least some sort of transit pass seems to be coming in time for the Super Bowl.

In an email statement, Alice Bravo, director of the Miami-Dade County Department of Transportation and Public Works, said a mobile pass will be coming soon to the transit store.

“Miami-Dade, Broward and Palm Beach counties continue to work on establishing a tri-county regional pass,” she said in the statement. “However, we can tell you that we are close to offering in our transit store a mobile pass that can be used on both Miami-Dade Transit’s and Tri-Rail’s systems. This pass is expected to be ready by Super Bowl LIV,” she said in the statement.

Last summer, county commissioners directed Mayor Carlos Giménez or his designee to work with Broward and Palm Beach counties to accelerate the creation of a tri-county pass before the Super Bowl comes into town.

Commissioner Esteban L. Bovo Jr. was the key sponsor of the resolution to create the regional transit pass in time for the Super Bowl, with Commissioners Eileen Higgins and Jean Monestime signing on as co-sponsors.

The pass that has been envisioned would allow riders engaging in the Super Bowl festivities to pay a single fare and access a variety of modes of transportation across the three counties.

The idea of a tri-county transit pass has been in the works for awhile. Broward County Transit and Palm Tran have been working with the county and the South Florida Regional Transportation Authority for years to create a regional pass.

The resolution goes on, “it is imperative to provide not only an efficient transportation system, but also a mechanism, such as a regional transit pass, to facilitate the transfer from one transportation mode to another in the region.”

Recently, The South Florida Regional Transportation Authority raised fares for Tri-Rail. The first price bump in more than a decade, the full-price monthly pass will cost $110, up from $100.