Advertisement
The Newspaper for the Future of Miami
Connect with us:
Front Page » Communities » Schedule of the multi-day partying for Super Bowl

Schedule of the multi-day partying for Super Bowl 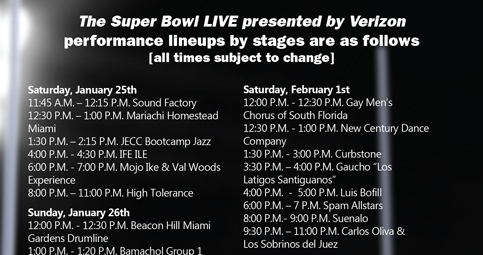 Miami certainly knows how to throw a party and this year’s Super Bowl is the perfect excuse to plan one.

And oh what a party it is, like a seven-layer cake with extra icing and a Royal Palm on top.

Super Bowl LIVE presented by Verizon, the free-to-the-public weeklong fan festival that will showcase Miami’s vibrant culture and music scene, is taking over all of Bayfront Park during Super Bowl week.

“Our team has worked hard to bring the game to everyone and create a memorable, fun and interactive Super Bowl experience for visitors and residents alike,” he said.

No surprise the extended party is a major event, as planning for the gig was orchestrated in part by William D. Talbert, president and CEO of the Greater Miami Convention & Visitors Bureau, a man who has been a champion and cheerleader for the area for decades.

Mr. Talbert and the team at the visitors bureau know the value of attracting major events like the Super Bowl to Miami, attracting the eyes and attention of the world onto our tropical doorstep and fostering tourism with a capital T.

The benefits are far reaching.

It’s that value and pride that Mr. Talbert brought to his role on the host committee.

“Greater Miami and the Beaches is proud to be a world-class event town hosting more Super Bowl games than any other destination in the country,” Mr. Talbert told Miami Today.

“As visitors arrive in Greater Miami for Super Bowl LIV, they will be welcomed by authentic and diverse neighborhoods that have been transformed since the last time the destination hosted the big game 10 years ago,” he said.

Super Bowl LIV, the 54th Super Bowl and the 50th modern-era National Football League championship game, will decide the champion for the NFL’s 2019 and 100th season. The game will be played on Feb. 2 at Hard Rock Stadium in Miami Gardens.

“Whether visiting Little Havana, Little Haiti, Historic Overtown, Wynwood and many others, visitors will discover a cultural landscape of unique experiences in addition to our world-class beaches and burgeoning downtown,” Mr. Talbert said.

“It may be the 11th time we host the Super Bowl, but we will treat it like our first and continue to welcome Super Bowls for years to come,” he said.

This will be the first time visitors and the community at large will have the opportunity to celebrate all things Super Bowl at a free-to-the-public event in Downtown Miami, according to the committee.

The Road to the 11th will feature a regulation size football field as a grand entryway into Super Bowl LIVE presented by Verizon detailing the rich the history of the past 10 Super Bowls hosted in Miami.

The committee says this will be a phenomenal opportunity for fans to be able to photograph themselves with larger-than-life footballs portraying the teams and final scores for each of the games.

Tailgate Town featuring the Culinary Stage will take participants through the sounds and smells of a true tailgate. Tailgate Town will be an epic pre-game party featuring Celebrity Chefs, tailgating concessions, decorative seating, and games in a family friendly area.

Super Bowl LIVE guests will have the opportunity to experience the senses of Miami’s cuisine and culture at the Miami Super Bowl Host Committee Culinary Stage. The stage will feature live cooking exhibits and demonstrations from world-renowned chefs and celebrity guests from the NFL community working together on interactive fan activities.

Fans are sure to enjoy a spectacular display of water stunts at the Super Bowl LIVE Water Show, featuring a personal watercraft stunt and freestyle show with a wild array of aerial tricks and dizzying backflips of jet skis, flyboards and water jetpacks.

Stunts will include jetpack performers completing tricks up to 70 feet in the air and jet skis hitting amazing tricks, flips and spins up to 15 feet high. The experience is led by two-time nationally ranked pro freestyler, Chris Anyzeski, currently first place in the US and second in the world.

The Super Bowl LIVE Evening Parades will feature more than 100 performers Friday and Saturday night full of the rhythmic culture Miami has to offer.

Miami’s Caribbean Carnival will feature Junkanoos and oversized costumes from our Caribbean community alongside the incredible sounds of Socca beats and Steel Drums. Miami’s Latin Parade will feature Brazilian Samba Dancers & Rhythm Beaters “Batucada,” the acrobatic dance of Capoeira and the costumes of Cuba, Colombia, Venezuela and Argentina.

To close out the night, following the parade and concerts on Friday and Saturday nights, Biscayne Bay will light up in a fireworks show illuminating the sky over the park.

In addition to Super Bowl LIVE, fans will be able to kick off the biggest week of the year at Super Bowl Opening Night Jan. 27 at 7 p.m. at Marlins Park and continue to celebrate the culmination of the NFL’s 100th season at Super Bowl Experience at the Miami Beach Convention Center.