Advertisement
The Newspaper for the Future of Miami
Connect with us:
Front Page » Top Stories » Miami gets own kicks in Super Bowl LIV sideshows

Miami gets own kicks in Super Bowl LIV sideshows 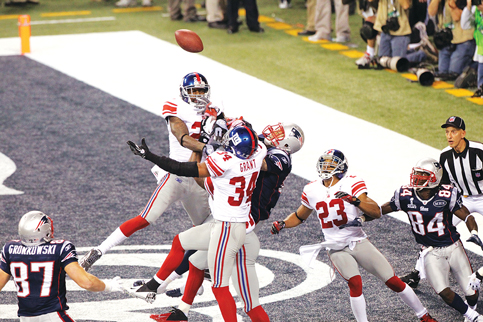 With Super Bowl LIV just over two weeks away, there’s no shortage of related happenings throughout South Florida, including many official events hosted by the NFL and Miami Super Bowl Host Committee (MSBHC).

Central to those activities is Super Bowl Live, which runs Jan. 25 to Feb. 1 at Bayfront Park, described on the committee’s website as “a week-long fan fest free of cost to guests of all ages.”

Features and events at Super Bowl Live, according to Mr. Martinez and official materials, include:

■The Huddle Down Community Stage, which will show a “wide array of local talent showcasing the culture and diversity of” the South Florida community, with “bands, specialty musicians, dance teams and visual art performance” showcased daily, as well as shows by “schools and youth performers.”

■Night concerts Jan. 31 and Feb. 1 on the Amphitheater Stage, “including 2012 Haitian Artist of the Year J. Perry and headliners Walshy’s Fire, Miami Orchestra and Miami Nu Deco Orchestra Ensemble,” as well as Saturday performance by American indie pop and neo soul band Fitz and the Tantrums.

■Road to the 11th, featuring “an oversized Astroturf football field as a grand entry thoroughfare into [the event] showcasing … the past 10 Super Bowls hosted in Miami,” leading up to the record 11th hosting by Miami this year.

■Wynwood on the Water, “an arts-meets-football project” in which “artist Risk will debut his mural to showcase Super Bowl LIV for fans.”

■Evening parades Jan. 31 and Feb. 1 featuring “over 100 performers,” including Miami’s Caribbean Carnival of “Junkanoos with incredible oversized costumes from our Caribbean community, catch soca beats and steel drums and steel drums,” and Miami’s Latin Parade with Brazilian samba dancers and rhythm beaters, or batucada, acrobatic capoeira dancers and the vibrant costumes and rhythms of Cuba, Colombia, Venezuela and Argentina.”

■Fireworks Extravaganza nights Jan. 31 and Feb. 1, following the parade and concerts, where “Biscayne Bay will light up in a spectacular fireworks show illuminating the sky above the bay.”

Mr. Martinez said Verizon, the presenting partner of Super Bowl Live, will supply most of the event’s current and former football star participants.

“They arrange for players with whom they have relationships or contracts to come on-site and do signings and autographs,” he said, adding that also goes for the culinary events. “There’s a lot of that going on, where the players will come up and cook with [them].”

Ticket costs through Ticketmaster start at $20, with free tickets available to all service members, veterans and their families Jan. 29.

The effects of climate change, pollution, beach erosion and a receding Everglades are especially impactful in South Florida, and MSBHC is hosting several environmental events alongside the NFL and local partners, including:

■Environmental Village, an event partnership with Ocean Conservancy and the Everglades Foundation at Super Bowl Live meant to “raise awareness of Miami’s environment through the Ocean to Everglades initiative.”

■NFL Green and Verizon Recycling Rally at ZooMiami Jan. 18, where the committee and volunteers will collect old electronics, including outdated mobile devices, to ensure that they’re disposed of properly.

■A media tour of Florida Bay with the Everglades Foundation Jan. 29.

■Python Bowl Awards at Super Bowl Live Jan. 25, the culmination of related efforts to eliminate invasive pythons in South Florida in partnership with the Florida Fish and Wildlife Conservation Commission.

“Python snakes are an invasive species that are creating havoc on the wildlife in our Everglades, so we’re teaming up to create awareness of that, do hunts out there with people interested in that and other things,” he said. “It’s been a big thing for the governor, and this is a piece of that. There’s prize money – not a lot – that’s up there for incentives for hunters.”

Additionally, he said, MSBHC will oversee a pair of exclusive events: a welcome event Jan. 28 at PortMiami for international media covering Super Bowl LIV, and a VIP party for the committee’s partners, sponsors and supporters at Bal Harbour Shops, held in partnership with the mall and the Village of Bal Harbour.

“Some events really don’t cost any money,” he said. “For the bigger events, like Super Bowl Live, the committee collects funds from groups that want to have presences in Bayfront Park. That’s how we’re able to generate revenue to produce something for a week long with music, entertainment and all the things that go along with it.”

Such sponsors, he said, include PepsiCo Beverage Co., French alcoholic beverage company Pernod Ricard, the Florida Department of Agriculture, American Cancer Society and NASA, which will bring its lunar rover and other space-related exhibits to Super Bowl Live.

In a Dec. 20 press release, MSBHC announced it had added five prominent sponsors to its list of supporters.

Retail bank Truist, formerly known as BB&T before its acquisition by SunTrust Banks in December, will serve as the committee and lead partner for its Hospitality House adjacent to Super Bowl Live.

Sustainable technology company Footprint joined the committee’s environmental initiative, Ocean to Everglades, as the official provider of food ware products for the event.

Prepared meal service Delivery Lean, headquartered in Hollywood, FL, will provide prepackaged meals for all 10,000 event volunteers throughout the week.

Safe mobile application SaferWatch will serve as MSBHC’s official safety app, to be used by staff and volunteers to help monitor lead-up events and aid attendees in reporting crimes, suspicious activity and other potential threats to Miami-Dade, City of Miami and Miami Beach police.

Ambulance company American Medical Response, a subsidiary of Global Medical Response, will serve as the official medical transportation service of the committee. The company will install two first aid stations at Super Bowl Live and one at MSBHC’s Brightline Volunteer Headquarters.

■Perry Ellis International, which is serving as the committee’s official uniform provider, with uniforms made of recycled materials provided to MSBHC staff and volunteers.

Of course, events under the purview of MSBHC comprise just part of the Super Bowl-related events that will be held around South Florida in celebration of the big game.

Mr. Martinez says he doesn’t view those other events as conflicting with committee and league efforts.

“In Miami, for major events like Winter Music Conference, Miami Music Week and Art Basel, that also occurs, so certainly when an event like Super Bowl comes to town, you have events that are official and others that come in that, while not official events, would look like they are [to attendees],” he said. “It’s them doing their own thing, which is not in conflict with the NFL because they’re not utilizing any of the NFL or host committee marks. They’re just theming their event or party around football and the Super Bowl.”