Advertisement
The Newspaper for the Future of Miami
Connect with us:
Front Page » Business & Finance » $76 million opens door for Gateway at Wynwood 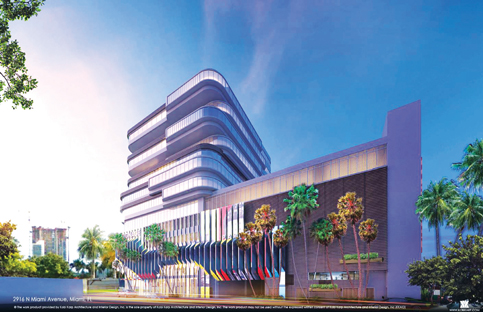 On a corner where Midtown Miami meets the Wynwood Arts District, a family-owned realty group based in New York has secured a $76 million construction loan to build the Gateway at Wynwood project with 220,000 square feet of offices and 25,900 square feet of retail.

Developers say the site at 2916 N Miami Ave. is ready for foundation work and construction to advance, with a projected opening in the second half of 2021.

The developers assembled the 1.1 acres in several acquisitions in 2016 and demolished industrial buildings there. In early 2017 the project as then conceived came before the City of Miami’s Urban Development Review Board seeking several code waivers. It also received conditional approval then from the Wynwood Design Review Committee.

Rose & Berg Realty Group LP got the construction loan that closed Dec. 26 from 3650 REIT. The realty group says it owns, manages and has under construction more than 1 million square feet of multiple types of projects along the East Coast. Berkadia Commercial Mortgage LLC brokered the loan.

The project has changed substantially from the design that came before the city review board in 2017, then planned with a garage for 574 vehicles by 2994 NMA Gateway Properties LLC for 2916-2994 N Miami Ave. and 26-28 NW 30th St. The 12-story building as proposed then was to house about 184,300 square feet of offices and 33,750 square feet of commercial space, along with the parking levels.

The Urban Development Review Board at that time gave the project conditional approval. Board members said they appreciated the developer seeking out local artists for garage façade artwork but recommended reducing the artwork.

Some board members said then they were concerned with the look of the structure, saying the design of the three uses was so distinctive it looked like three separate projects stacked atop one another.

Other conditions of the board’s vote included working to integrate the three levels, enhancing the landscaping, and considering a design to make the garage access aisle wider, and more.

Architect Kobi Karp said at the time that the project was proposed for a unique location, at 29th Street and North Miami Avenue where two greatly evolving neighborhoods meet.

The developer at the time planned to create a friendlier streetscape by building a broad sidewalk for the project, Mr. Karp told the review board.

Nicholas J. Barshel, an attorney representing the developer, said in a letter to the city in 2017: “The property is located at the northern edge of Wynwood, the former warehouse turned arts district that has drawn significant attention for its now world-renowned street art, and lies at the intersection of Northwest 29th Street and North Miami Avenue, two of the most important thoroughfares in the area. Based on this location, the property serves as a natural gateway between Wynwood and the more dense development of the Midtown District to the northeast.”

Wynwood has been gradually transforming into a mixed-use neighborhood, harnessing a creative spirit in Miami’s urban core and maintaining a purposeful focus on providing an interesting mix of innovative and dynamic work spaces and offices, Mr. Barshel said in his letter.

He wrote that Gateway at Wynwood intended to utilize the prime location to satisfy the demand for dynamic office spaces in and around Wynwood.

“Our strength has always been going into up-and-coming areas – just like Wynwood was when we entered that submarket – and making a mark for generations to come, said Shelby Rosenberg, a principal with Rose & Berg Realty Group, in a release on Friday.

Colliers International South Florida is handling the office leasing for Gateway at Wynwood.