Advertisement
The Newspaper for the Future of Miami
Connect with us:
Front Page » Healthcare » Super scooper of floating Miami River debris gets rerun 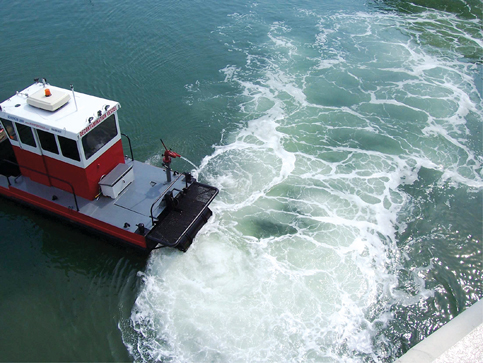 There’s a scavenger roaming the Miami River, and that’s a good thing.

The Miami River Commission’s Stormwater Subcommittee learned last month that the City of Miami is in the process of renewing its three-year contract with Water Management Technologies Inc., the operators of the Scavenger Water Decontamination Vessel, which collects floating debris, decontaminates 600,000 gallons of water and injects 39,626 gallons of oxygen per hour into it, which improves water quality. The decontamination boat and its crew cost $250,000 per year.

Between Jan. 1 and Dec. 13, 2019, Water Management Technologies, Inc. removed 201 tons of trash from the river and treated 1.2 billion gallons of water at the rate of 10,000 gallons per minute, according to a document produced by the company. The vessel traveled more than 2,200 nautical miles in its journeys and pumped more than 77 million gallons of oxygen into the water during that time.

Some of the benefits of purifying the water are that it kills bacteria and neutralizes viruses, destroys fecal coliform and cyanobacteria, balances phosphates and nitrates, controls algae growth, eliminates odors, and removes some pesticides, herbicides and fungicides that get washed into the water from the land along the river, the company document said. Removing trash and debris improves the look of the river and makes it safer for boaters.

“We picked up many navigational hazards, such as dock planks, 55-gallon oil drums, dock boards, and large tires,” the company’s report said. Employees donated 357 hours of service, which would have cost the city more than $71,000, the report added.