Advertisement
The Newspaper for the Future of Miami
Connect with us:
Front Page » Real Estate » Multi-use redevelopment of Wynwood industrial sites OK’d 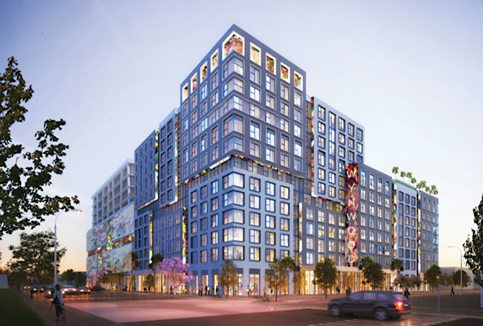 A set of interconnected buildings is designed to bring a mix of residential, retail and office uses to a block in Wynwood, along with major murals and other art treatments and a large courtyard.

The City of Miami’s Urban Development Review Board voted unanimously to recommend approval.

The venture is being touted as “a true live, work, and play environment.”

Designed by architectural firm Arquitectonica, Dorsey is to rise to 12 stories and include a building at eight stories, surrounding a landscaped courtyard for pedestrian mobility and activity.

The entire development will amount to 604,110 square feet, be home to 306 residences, 35,858 square feet of commercial-retail uses, 58,760 square feet of offices, and have parking levels to hold about 521 vehicles.

The property currently consists of industrial structures and surface parking, according to a letter to the city from Iris Escarra, an attorney representing Weck 29th LLC.

The site includes two adjoining properties with different zoning classifications, along with a special Neighborhood Revitalization District, or NRD-1 overlay, and a land designation of general commercial.

“The proposed project is an infill project adjacent to two highly traversed streets, NW 29th Street and NW 3rd Avenue,” she wrote. “The Property is located within the Wynwood neighborhood, which has seen a rapid growth over the last few years as it transforms from an industrial neighborhood to an arts and culture destination. The Project seeks to redevelop the industrial structures and provide Residential, Office, and Commercial Uses throughout the Property.”

Discussing details of the project with the review board at its December meeting was attorney Brian A. Dombrowski, also representing the developer, who introduced architect Raymond Fort.

The review board’s liaison, city planner Joseph Eisenberg, gave a background report on the project and noted that the NRD-1 gave the body broader review authority.

This project was also reviewed by the Wynwood Development Review Committee, which granted conditional approval Nov. 12, including asking the applicant to reconsider the proposed artwork screening on the northern garage levels, Mr. Eisenberg said.

Mr. Dombrowski said the developer is excited to bring this mixed-use project to a former industrial site in Wynwood with three frontages.

“We have a large courtyard,” he said, “retail uses on the ground floor, and a large pedestrian crosswalk … it fits the work-live-play vision, and there will be a lot of art opportunities.”

The architecture also uses rectangular cubic forms and alternating colors to help break up the façade, he said.

There’s not much shade in Wynwood, said Mr. Fort, so the site plan calls for bringing some shade trees in with a landscaping plan that includes palms and evergreens.

Board member Ligia Ines Labrada said the presentation was nicely done and she commended the developer’s team for providing access and cross sections with plenty of retail frontages, which she said will create a phenomenal urban experience.

“I have nothing but compliments for the project,” she said.

Board member Robert Behar said, “I also like the project. You’ve done a very nice job with it.”

Board member Ignacio Permuy was also a fan, commending the “exceptional” design.

“Terrific job,” was the assessment of board member Willy Bermello.

“I’ll vote for it. I really like how you resolved every aspect … I like the massing and articulation, particularly on the ground floor … I don’t have any concerns or objections,” said Mr. Bermello.

But board member Neil Hall was critical of the project. By bringing residential into Wynwood in this fashion, he said, “you destroy the brand.” It goes against the years of work to develop this neighborhood as a special area for “creativity and funkiness,” Mr. Hall said.

“The building you created looks more like it’s coming out of New York – I don’t see a Miami theme …,” Mr. Hall said. “The same thing happened in Midtown. We put up 30-story buildings and destroyed the feeling of Midtown.”

“You did an excellent job breaking up the uses,” Mr. Perez said. “This project is really well designed.”