Advertisement
The Newspaper for the Future of Miami
Connect with us:
Front Page » Business & Finance » Boarding time for architectural firms at PortMiami 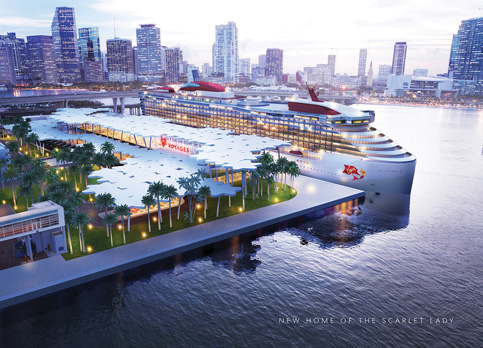 Three Miami-based architecture firms with prior ties to PortMiami will help Miami-Dade County and numerous cruise lines in redeveloping the “Cruise Capital of the World.”

The non-exclusive professional service agreements each will run for six years and max out in compensation at $3.3 million – $3 million plus a $300,000 contingency.

“The scope of services includes general and Port and Waterway Systems [architectural and engineering] planning, design and post-design services,” a Dec. 3 memo from Mayor Carlos Giménez said. “These professional services are required to provide state-of-the-art facilities to support port operations that are evolving as the industry advances.”

Bea Architects Inc., founded in 1992, boasts a portfolio of projects throughout the Americas, Asia, Europe and the Caribbean.

The self-described “interdisciplinary design firm,” run by Principal-in-Charge Bruno-Elias Ramos and Principal Associate John Coloa, has a staff of roughly 30, according to its website.

The firm’s prior projects at the port include Terminals D, E, F and G.

Berenblum Busch Architects Inc., founded in 2010, is a “global architecture, planning and interior design firm” whose principals and founders, Gustavo Berenblum and Claudia Busch, have more than 40 years of combined experience, the company’s website says.

The firm, whose office houses a staff of about 10 key employees, lists existing and prior PortMiami projects at Terminals B and F.

Bermello Ajamil & Partners, a firm whose history dates back to 1932, operates on six continents from its offices in Florida, New York and Denmark, with a staff of more than 100 people.

The firm’s board of directors is chaired by Willy Bermello. Its president and CEO is Luis Ajamil.

The three firms were selected through a vetting process the county began Oct. 10, 2018, with a notice to professional consultants. Seven firms submitted proposals in response to the notice by Nov. 9, 2018.

Carnival, with which the county first struck a terminal deal in 1998, extended its preferential berthing rights at Terminals D, E and F for 20 years plus two seven-year renewal options, beginning on or around Oct. 31, 2022, when improvements at Terminal F are expected to finish.

Should the company exercise both renewals, the county expects to get about $921.4 million in gross revenue.

MSC, which seven years ago signed its first birthing agreement with the county, entered into a 62-year deal with the county. The company is to relocate its stateside corporate office here from Broward County and build cruise Terminals AA and AAA across 20 PortMiami acres – a more than $300 million project that, upon completion, will enable the company to handle two 7,000-passenger ships at a time.

PorMiami Director Juan Kuryla called it “probably the longest-term deal that we’re aware of in the history of a port and a cruise line.”

Norwegian signed a new 30-year deal with the county, set to commence upon completion of a new Terminal B by May 29, 2020. The total project budget for the new terminal and related architecture, engineering and design costs are projected to be $239 million.

And nearly five years after Virgin announced plans to enter the cruise market, the Plantation-based joint venture between the Virgin Group and Bain Capital agreed to make PortMiami’s planned Cruise Terminal V its exclusive Florida homeport for 10 years and the only homeport on the state’s East Coast through 2051.