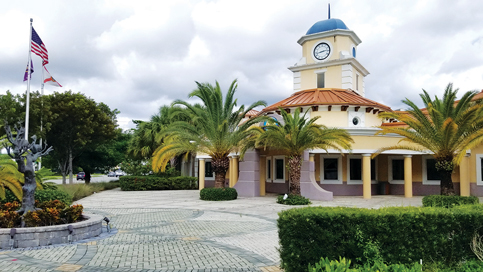 Palmetto Bay has resumed talks with real estate firm NAI Miami, the second-ranked proposer on a project to redevelop the village’s downtown area, after its first choice abruptly pulled out of negotiations.

Village council members voted unanimously Nov. 4 to reconsider a proposal from NAI and terminate dialogue with first-ranked i3 Interests LLC, whose unsolicited $72 million project proposal in 2018 sparked a bid request by the municipality.

NAI, the only other respondent to the request, is to present updated plans to the village by February and begin talks with a task force the council created to negotiate with i3, Mayor Karyn Cunningham said.

“I think the presentation will look a little different than what they originally submitted,” she told Miami Today.

NAI’s $14 million proposal, conversely, would have required the village to take on debt, omitted costs for a hotel and had no entertainment, senior housing or village square pieces.

But according to NAI principal Josh Rodstein, his firm’s plan was and remains more realistic.

“What [i3] proposed for this site was putting 10 pounds in a five-pound bag,” he said. “When all was said and done, you wouldn’t be happy with the project. There were some components we thought [would] fail.”

Mr. Rodstein said his firm’s plan includes more on-street parking, which would benefit surface-level retail planned for the area. He talked of a 270-space garage with 40 or so apartments built above it for seniors and an up to 5,000-square-foot facility nearby with retail and dining.

NAI also has several parties interested in developing the hotel part, he said – but the idea for a movie theater? Overkill.

“Putting an entertainment facility there was just creating way too much activity in the area for parking and the like, just made it too difficult,” he said. “Our thought was you’re trying to put a little too much on approximately four, maybe five acres.”

While NAI’s solution “won’t be nearly as glamorous or unique as the i3 project,” Councilman David Singer said, something must be done to redevelop the village’s center.

“We have a downtown area that’s blighted and needs improvement,” he said. “It’s an area needed by the residents who have been calling for entertainment, restaurants and walkability for years, and it’s never gotten the attention it deserves.”

Talks with i3 all but died Oct. 7 when the firm’s principal, Rene Joubert, sent an email to the village expressing displeasure over hearing that Village Manager Ed Silva would exit his position six months earlier than his contract with the municipality provided.

Upon learning that Mr. Silva was “being terminated,” Mr. Joubert wrote, the firm’s “understanding of and confidence in the village’s plan to proceed” was irrevocably damaged.

“We are very disappointed to get to this point as we have spent many hours and days cultivating a plan and, even more importantly, a relationship of trust with many residents and the council,” he wrote. “This termination, after all of these months of work and establishing a path forward, unfortunately creates uncertainty that we aren’t able to navigate.”

By early October, i3 had spent upwards of $100,000 on planning, design and other preliminary expenses related to the project, Mr. Singer and Vice Mayor John DuBois said.

“I would be shocked – floored – if they ever went to Palmetto Bay again,” Mr. Singer said. “I think they learned that Palmetto Bay is not the most friendly council [with which] to do development.”

Ms. Cunningham, Mr. DuBois and Councilman Patrick Fiore said that while Mr. Silva’s pending departure was indeed informed by the council’s majority wishes, he wasn’t terminated but had resigned, effective Jan. 15, and would receive a severance package of about $60,000 plus some benefits.

Mr. Singer cast the sole “no” vote, but he wasn’t alone in opposing the decision.

“I made the argument for him to finish his contract,” Mr. Fiore said. “We’re at a critical juncture [and] need a continuous hand at the helm. Since the contract wasn’t renewable, we had plenty of time to search for a new manager and didn’t have to pay any severance.”

But paying a severance now could help the village avoid upheaval in leadership during its next budgeting process in June, the same month Mr. Silva’s contract would have otherwise expired, Ms. Cunningham said.

“How do you, right in the process of that, plug in a new position?” she said. “Personally, I’m ready to move in a different administrative leadership direction.”

Mr. DuBois, whom Ms. Cunningham appointed as her liaison to the task force, said that Mr. Joubert told him in a follow-up meeting that while Mr. Silva’s discontinued involvement in the process was jarring to the firm, it wasn’t the only reason i3 Interests withdrew.

Another reason for i3’s sudden trepidation, Mr. DuBois said, was due to a move by village resident and task force member Don Waters, whom he described as “a heavy-duty real estate developer very familiar with structural issues.”

In one of just two meetings the task force held since its July 15 creation (and the only one to establish quorum), he said, Mr. Waters submitted to i3 an outline for a business relationship that deviated in parts from traditional public-private arrangements.

“It suggested a pure land lease with no risk to the village, and i3 would basically pay us monthly rent it would then use for the project, which – regardless of where the project could have ended up, was kind of an aggressive opening bid on our part,” Mr. DuBois said. “That’s not to say they were inflexible, but that was the first red flag that came up for i3 that this wasn’t necessarily going to be what they thought.”

The idea that a multimillion-dollar deal could fall through because one person was no longer involved, he said, was ridiculous.

“You don’t do a $60 million deal contingent on one person,” he said. “There’s plenty of bench depth, and business people don’t’ take that kind of risk.”

“It’s unfortunate when you have a lot of people take a shot at us as a council, blaming it on one termination – resignation of the manager,” he said. “The manager, at the end of the day, does what the council wants. If the council says we like the project, make it work, regardless of who’s in that seat, their job is to make it work.”

Mr. Silva, Councilwoman Marsha Matson, NAI Miami and i3 Interests did not respond to requests for comment.