Advertisement
The Newspaper for the Future of Miami
Connect with us:
Front Page » Communities » Closed Morningside Park pool could reopen elsewhere 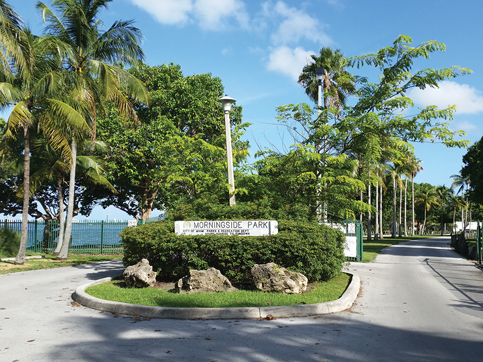 A new Morningside Park swimming pool seems all but certain to be built away from its historic but long-closed waterfront site.

But new features could be coming to mitigate the park’s vulnerability to flooding.

At Miami’s Climate Resilience Committee meeting Dec. 2, the Office of Capital Improvements updated members on plans for Morningside Park, reiterating a preference to build the pool inland in the park, and touched on climate resilience features that could be coming to the park.

Jorge Mora, of the Office of Capital Improvements, shared the Morningside Park Proposed Plan, which he clarified was not the master plan. The plan calls for the pool to be built near the community center, toward the park’s north end. The current defunct pool is by the park’s waterfront and was shut down about four years ago.

Mr. Mora said that moving the pool site would allow for open space along the waterfront and would be better for maintenance and operation.

“You’ll find that individuals, instead of having to go to two facilities, back and forth, really feel safe leaving your child in one facility for an entire day,” Mr. Mora said.

Morningside is a 43-acre park at 750 NE 55th Terrace. The future of its pool has been subject to much debate. Community meetings have included one in September at the Morningside Park Community Center with district Commissioner Ken Russell and Mayor Francis Suarez, with some preferring the pool be rehabilitated or the new pool be built in its original location.

However, city staff stated building a new pool in the original location would require that it have a higher elevation. While both the suggested pool location and the current one are in FEMA flood zones, if the pool is built in the latter it would not only have to be higher but also require additional measures for water to flow beneath and around the structures.

Mr. Mora said the city would reengage with the community next year on the plans.

During the presentation, it was also mentioned that the city, through the Department of Resilience and Public Works, could be partnering with the Nature Conservancy. The city is working on an agreement with the conservancy that could see funding to transform the park’s waterfront to a natural shoreline.

It was announced last year that the Nature Conservancy had teamed up with Chubb, a causality insurer, for a $1 million grant from its charitable foundation that would go to a restoration and resilience project in Miami-Dade County. The project would “demonstrate the flood protection benefits of nature-based solutions,” according to The Nature Conservancy website.

“Through their initial analysis, they landed on Morningside Park because of the potential of a natural shoreline here,” said city Chief Resilience Officer Jane Gilbert, “not only to protect the park – because that’s not protecting a lot of people or property values – but because a good design in the park could protect the surrounding neighborhood.”

Ms. Gilbert told Miami Today that building the pool by the community center would allow for more flexibility when designing the living shoreline.

Vice Chair Jose Regalado noted that the pool has long been out of service and said politics has been at play.

“There’s a lot of pushback to get it done right now, some to rebuild it, some to preserve exactly as is, as the park is deemed historic,” he said. “However, it’s not resilient, and I think this a great example of where we are going to be at some point…. where we have to look at the Miami today and the Miami that we are building.”