Advertisement
The Newspaper for the Future of Miami
Connect with us:
Front Page » Communities » Miami’s scooter pilot program walks a tightrope 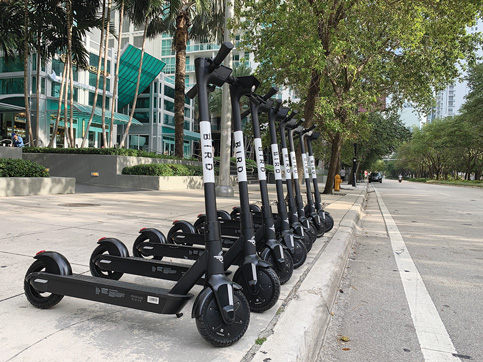 The City of Miami’s scooter pilot program has once again been extended, this time to mid-February, with its long-term future still up in the air.

Chairman Ken Russell, the district commissioner for the scooter pilot, again asked his fellow commissioners to extend the pilot while the administration hashes out a solicitation for proposals. While the legislation had originally called for a four-month extension, the city commission passed a resolution that will lengthen the pilot through Feb. 14, after Commissioner Alex Diaz de la Portilla suggested a shorter extension.

Mr. Russell told commissioners who have opposed the pilot that if by the end of the extension the “administration has not implemented the amendments that were put in place at the first extension that should be alleviating the problems you’re feeling, we will stop this program.”

Among the safety measures he said he has yet to see implemented are scooters with identification numbers, stopping the scooters from going into other districts, and hub locations for the scooters that were to be designated by the city’s Public Works and Parks departments.

But what could very well be the major threat for the pilot is underage scooter usage, which Mr. Russell acknowledged remains a problem. He has asked for the administration to work out a way to impose a $100 fine for parents who are caught allowing their children to ride the scooters.

In a brief exchange that evidenced how repetitive the scooter discussions have gotten, Commissioner Manolo Reyes said to Mr. Russell that he knows that he doesn’t want him to talk about the pilot, to which Mr. Russell jokingly replied, “I really don’t.”

Mr. Reyes has consistently voiced opposition to the pilot, saying the scooters are unsafe and are being used by children. The scooter pilot currently does not operate in his district.

Currently restricted to District 2, scooter riding can be seen in Coconut Grove, Brickell, Downtown Miami and other neighborhoods. Revenue from the scooter pilot results in additional funds for bicycle and pedestrian infrastructure in District 2, with the first fully funded lane having debuted this year.