Advertisement
The Newspaper for the Future of Miami
Connect with us:
Front Page » Profile » Andreas Siegel: Consul general seeks broader knowledge of Germany 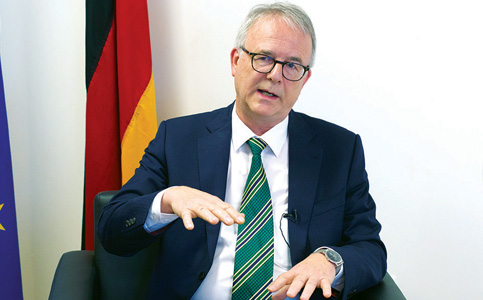 Growing up half a mile from the Berlin Wall in the 1960s, Andreas Siegel was exposed to a variety of global perspectives. He watched East German television, listened to American Forces Network radio and took in French and British media.

It engendered in him an earnest curiosity about the world, and at age 17 he applied to become an exchange student, traveled to Michigan and spent a year of high school there.

“That had a profound significance for what followed,” said Mr. Siegel, the new consul general of Germany in Miami.

After high school, he studied French, English and American literature, hoping to become a language teacher, but it was difficult for Germans at the time to enter European community institutions.

“One of the things I came up with was, why not try German diplomacy?” he said.

Such was how Mr. Siegel commenced with a lifelong career in international relations – a journey that took him from a desk clerk post at a Foreign Office in Poland and a job as vice consul in Boston to service in Strasbourg, Brussels, Southeastern Africa, two leadership postings in Morocco – one as an embassy head of economics and another as consul general – and, most recently, a consul general job in Ho Chi Minh City, Vietnam.

He officially took over Miami’s German consulate Sept. 10, and he hit the ground running.

“There are no regular days, but the past few weeks have been characterized by many public events concerning the commemoration of 30 years of the fall of the Berlin Wall, [including] exhibits, media contacts on lectures on that topic, which made me very busy,” he said. “We also have other cultural and economic issues. I regularly meet with the German-American Business Chamber, Greater Miami Chamber of Commerce, and Beacon Council. I’m just discovering the variety and diversity of the things that you can do here in Florida.”

Mr. Siegel sat down with reporter Jesse Scheckner. The interview, recorded by Jahmoukie Dayle, can be viewed below.