Advertisement
The Newspaper for the Future of Miami
Connect with us:
Front Page » Top Stories » Repairs due in 2020 for falling Metromover concrete chunks

Repairs due in 2020 for falling Metromover concrete chunks 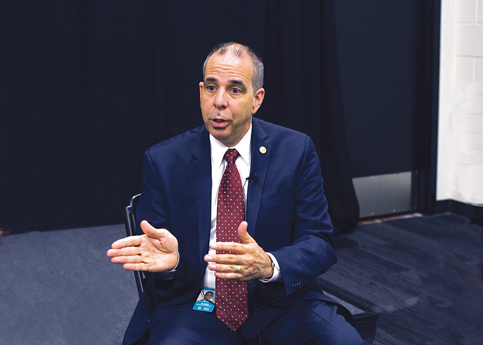 Two projects to fix unstable concrete on the Brickell and Omni loops of the Metromover totaling about $5 million will start next year, as Miami-Dade lawmakers Dec. 3 OK’d an emergency expenditure to fix problem areas and install new safety netting.

Buford Whitaker, assistant director of rail services for the county, estimated in September that contractor Gomez Construction Co. will begin work “sometime in the first quarter of 2020.”

Once started, the repair and prevention work is expected to last up to 150 days.

Concrete first fell from the overhead transit lines circling the City of Miami in August 2017, when large chunks of debris fell from Metromover tracks onto Brickell sidewalks and streets.

On July 25 this year, two days after commissioners authorized Mayor Carlos Giménez to apply for a $1 million federal grant for Metromover and Metrorail bridge inspections, concrete again fell from the line above Southeast First Avenue, this time nearly striking a pedestrian.

Deputy Mayor Jennifer Moon wrote in a memo that the county had stepped up its inspections schedule of the line from the minimum 24-month intervals to every six months “due to the identification of increased corrosion and related delamination” on both loops.

Gomez’s work, she wrote, will remove concrete pads “at all locations deemed necessary” along both loops, add structure protection from further corrosion “where accessible” and install more safety netting between the system’s girders and under designated walkways “to supplement the existing safety netting system.”

The county will pay Gomez $2,550,978 and $2,529,979 for the Brickell and Omni projects, respectively, which the contractor is to conduct simultaneously.

Money for the repairs will come from the People’s Transportation Plan (PTP), which is composed primarily of funds raised by a countywide half-penny tax voters OK’d in 2002 to expand transit.

In 2009, county commissioners and the PTP’s overseer, the Citizens’ Independent Transportation Trust, voted to combine the PTP with the county general fund to support existing transit services during the recession.

On March 19, after nearly a decade of diverted transit dollars, commissioners voted to detangle the funds this year.

However, trust Chairman Joseph Curbelo said that the Metromover concrete repair work is part of the group’s five-year plan of leftover operations and maintenance costs.

Mr. Curbelo, who said he joined the trust after becoming displeased by unfulfilled transit expansion promises, cautioned against separating the two funds too quickly.

“We don’t want to pull the rug out from underneath Miami-Dade Transit and their budget operations,” he said. “If unwinding unification means we’ll have less frequent service and more inconvenience to the riding public, we wouldn’t be doing justice. We need to be more strategic.”