Advertisement
The Newspaper for the Future of Miami
Connect with us:
Front Page » Education » New trolley link for Florida International University 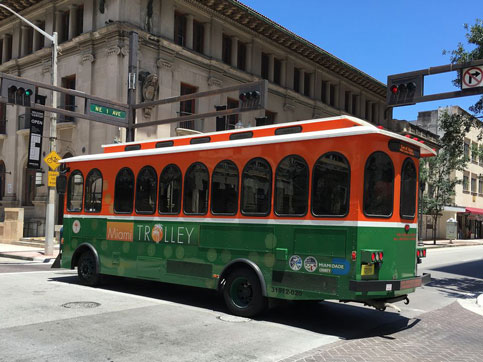 A trolley proposed beyond city limits could be a crucial link among the city of Miami’s westernmost neighborhood, Florida International University (FIU) and, through their respective connections, nearly every corner of the county.

The potential benefit is huge. It would provide a free or cheap two-seat ride with multiple stops between FIU’s main campus and the Miami Intermodal Center next to Miami International Airport, where Metrobus, Metrorail, Tri-Rail, Greyhound and Amtrak converge.

It would also connect FIU students and teachers throughout the county to the university’s two largest campuses weekdays on the free Panther Express shuttle.

Commissioner Xavier Suarez, sponsor of the resolution directing the county to design the route, said the service is vital and long overdue.

“A mass transit connector from Miami to FIU has been a No. 1 priority for more than 20 years and an integral part of the SMART Plan, but we have not progressed on it,” he told Miami Today. “It’s the working person’s east-west connector – doesn’t replace it, but for maintenance and hotel workers, and students and teachers who can do homework or grade papers on the trolley, it’s going to be a hell of a solution.”

Mr. Suarez’s item directs the administration to look at using either trolleys or 30-foot buses that resemble trolleys. It was to go to the Transportation and Finance Committee for review Wednesday. A final county vote would follow Jan. 22.

An FIU connection could be the saving grace for the Flagami Trolley, which Transit Alliance Miami says is the city’s second-least-productive route – Alliance numbers show it averages just 7.4 hourly boardings, costing the city $7.48 per ride.

Without more riders, the trolley could be gone by mid-2021. The route launched in June 2018 as one of several three-year demonstration projects that transportation planners OK’d to be funded by countywide half-penny tax dollars.

Its among several similar projects under the SMART Plan, which local lawmakers passed in 2016 to develop a countywide express bus network and advance the studies of six key commuting corridors in order to attract state and federal funds for light rail or premium transit upgrades.

City Commissioner Manolo Reyes last week told Miami Today that the Flagami Trolley, which operates in his district, could be improved to better connect to county Metrobus routes. Efforts to boost the trolley’s productivity and establish more efficient routes are ongoing, he said.

Meanwhile, another piece of the area’s interconnectivity puzzle – an ongoing state study of Flagler Street for a possible 20-mile express bus service between Government Center and the Turnpike – is expected to get funding in 2022 and be ready in fall 2024.

“Sixty-two percent of the people of this county spend more than half their income on transportation and housing,” he said. “If you can get rid of the transportation part, a lot of folks are going to be able to improve their lifestyles.”

One Response to New trolley link for Florida International University