Advertisement
The Newspaper for the Future of Miami
Connect with us:
Front Page » Opinion » Cliffhanger at the Gusman meets new and frightening peril

Cliffhanger at the Gusman meets new and frightening peril

A headline in Miami Today last week unveiled a lawsuit by three survivors of the Gusman/Olympia’s donor to take back the downtown landmark 44 years after he made it his gift to the city.

That’s dramatic, as befits the building itself, but it’s only the latest chapter of Miami’s perpetual cliffhanger, thrilling newspaper audiences as long as “The Phantom of the Opera” has appeared on the Broadway stage – 31 years.

When the Gusman Theater at the Olympia Building was built in 1925 as Miami’s great motion picture palace, programs included not just the feature film but short subjects. Most popular were serials, weekly episodes of long-running dramas of peril, each episode ending with the hero or heroine in a seemingly impossible crisis. You had to wait for next week’s show to learn how they escaped certain death. They were known as cliffhangers.

Think of the end of an episode as the hero drove a car into a river or the heroine was tied to railroad tracks with a train almost upon her. How could they possibly escape? Would they? “Be here to find out.”

Many hundreds of those serial episodes were screened at the Gusman before the theater began being used for anything from drama and orchestral performances to dance as television seemed destined to drive movies to oblivion.

Then businessman Maurice Gusman bought and refurbished the building, including both the magnificent theater itself and upstairs floors that have at times been home to offices and residences (there are 80 apartments there now). He made it the home of the Miami Philharmonic Orchestra.

Several years later, in 1975, he gave the theater over to perpetual control of Miami’s Off-Street Parking Board as a way to preserve the building, a worthy future for the elegant theater interior that has historic status and its role as a civic cornerstone downtown.

But seemingly ever since, the Gusman-Olympia has been the subject of the longest-running cliffhanger ever to appear in a movie theater. The serial has revolved around the future of the Gusman itself. It has taken far more twists and turns over the past three decades than a century-old “Perils of Pauline” or Flash Gordon serial could ever have brought the public.

Most of Miami Today’s many dozens of reports on the Gusman-Olympia have focused on the peril the theater faced: who would finance it to keep it running, and who would control it?

One peril: in 1992 the city was accused of seeking to convert the building to a flea market. That same year the parking board looked to replace the building with a housing complex. The next year the city tried to get Miami-Dade County to take the building off its hands. In 1998 the Gusman threatened to close without a city subsidy. Then typical movie heroes, the police force, joined in a bailout for the Gusman. Sheer drama, over and over.

The cast of characters rotated, but among those with some longevity were the parking board, which was in control; city hall, which blanched at the theater’s frequent operating losses and the cost of the building’s upkeep; non-profits like the Friends of Gusman, who toiled selflessly to keep the landmark theater alive; and developers who saw advantages in the site for housing or offices.

A big-name but short-lived star in the drama bought a home next door to Vizcaya in Coconut Grove and decided he would save the Gusman. But the benefactor, actor Sylvester Stallone, found the path to protection rocky and he soon disappeared as a marquee character. 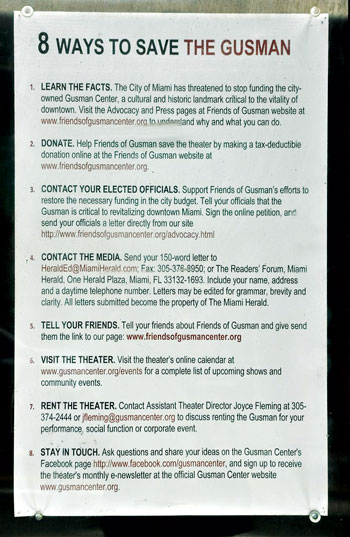 This sign to save the Gusman was posted in the theater’s front-door window in 2011.

Others in the cast have included a non-profit that eight years ago was given control of the building by the parking board with the hope that it would raise money to endow the iconic, ornate gem in perpetuity, and Miami Dade College, which for the past year looked at programming the building’s performances (the college, the nation’s largest, is a frequent user of its stage and has no downtown theater of its own) and using the building’s upper floors for student housing.

Then, in a recent thrilling episode, those of you in the (newspaper) audience will remember that the college – after its own public turmoil in a drama-filled presidential transition – decided that it couldn’t afford to accept the gift of a building with its hand out for costly upkeep and restoration.

That brought us to last month, when three of Mr. Gusman’s heirs (including one to whom the city offered the building in 1991 just to get rid of it) sued in circuit court to get the theater back for a – get this – defunct corporation that had existed for only one year in the mid-1970s to facilitate the transition of the theater to the city in the first place.

They attach evidence showing that the gift of the theater was for the parking board or its successors to control and that in 2011 (the suit mistakenly says 2001) the board handed the theater and building to a new corporation that was to save the complex. In the interim, corporation principal Herman Echevarria, who engineered the deal, has died, sending the city in search of a new benefactor for the Gusman.

It will be up to the courts and the city to determine such questions as whether a corporation that closed in 1976 has standing to sue for control of the Gusman, whether the Gusman heirs rightly control the defunct corporation, what the heirs have in mind for use of the theater (it’s a great development site if you don’t care about either history or civic need), and, if they plan to keep the theater open, what they will do to fund it.

In other words, the Gusman-Olympia serial goes on with new cast members and a new twist.

Will the city contest the suit as it should or consider it a godsend to rid itself of a money-losing albatross?

Will other claimants seek this great downtown corner property?

How will the courts deal with the nature of an historic and civic site unmatched in Miami?

For sheer plot twists and turns, and for perils at every juncture, how can you beat the efforts to keep open and healthy one of Miami’s undoubted historic and civic gems, the Gusman Theater at the Olympia Building in downtown Miami?

For the next exciting chapters, be sure to tune in to this newspaper regularly for the “Perils of the Gusman.” It’s a thrill a minute. Get your popcorn in the lobby.