Advertisement
The Newspaper for the Future of Miami
Connect with us:
Front Page » Government » At Miami International Airport, Sola flying solo on upgrades 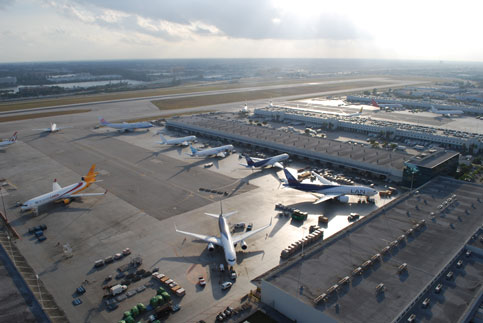 Five months after giving the OK to a $5 billion plan to improve Miami International Airport (MIA) through 2035, Miami-Dade lawmakers have opted to cut themselves out of the loop in approving its programs.

County Commissioners last week voted 7-3 for a new section of the county code granting Mayor Carlos Giménez and Aviation Director Lester Sola authority – without commission approval – to advertise, negotiate, award and amend contracts for goods, services and construction projects that are part of the massive plan.

The decision mirrors similar moves the commission made on big-ticket capital improvement plans for its PortMiami and Water and Sewer departments.

“That’s why we have been able to move ahead so much,” said Commission Vice Chairwoman Rebeca Sosa, the item’s sponsor.

The plan also includes provisions for upgrades at the county’s other air hubs, including a possible new air traffic control tower at Miami Executive Airport.

“This is a very competitive field, and if we don’t expand the airport, and expand it quickly, those flights with passengers and cargo will seek to go somewhere else,” he said.

Despite precedent elsewhere in the county and a seeming uniform confidence in Mr. Sola’s ethic oversight, a few commissioners still refused to hand over the proverbial keys.

Chairwoman Audrey Edmonson said the ordinance took too much power from the commission and eliminated safeguards, like the four-day rule that allows commissioners to forward late additions to the agenda to a subsequent meeting.

“We’re giving away all of our authority; everything comes to us after the fact,” she said. “We are putting $5 billion in one person’s hands.”

Furthermore, by circumventing commission authority, the county would also be reducing residents’ say in projects that could have lasting effects on their livelihoods, Commissioner Daniella Levine Cava said.

“My concern is still about transparency for the public [on] major public contracts and the use of public funds,” she said. “I heard from [Mr. Sola] that a streamlined process would provide more assurance. On the other hand, we are the body responsible for overseeing these contracts.”

Commissioner Eileen Higgins acknowledged the need to accelerate projects that could at times shut down large portions of MIA, one of two major economic generators here.

But a section in the ordinance limiting the newly delegated powers to Mr. Sola and not any successor to his position was troubling, she said.

“As we learned from all kinds of places around the world, when power is with one person rather than position, it’s problematic,” she said. “The idea that we’re going to create laws and rules and procurement processes for one person – no offense, Lester; we trust you – but in my opinion that is not good governance.”

Ms. Sosa pointed out to protections in the ordinance, including a required selection committee subject to review by the county’s Commission on Ethics and a monthly report from the mayor or Mr. Sola listing all procurement activities, active capital projects, as well as important metrics and milestones.

“The red flag is going to be part of this,” she said. “We’re putting more than exists in other departments at the airport because we want to make sure the whole world knows this commission has taken the proper steps to make sure that nothing happens in the future that is wrong.”

And no matter what, Commissioner Javier Souto said, the commission could always override the ordinance with new legislation.

“If this commission decides by vote that we don’t trust one director, the mayor can shove it down his throat or wipe his you-know-what with that person,” he said. “That’s the deal. The mayor cannot rule without us. We have the power here. This is government by commissioners. The charter says that clearly.”