Advertisement
The Newspaper for the Future of Miami
Connect with us:
Front Page » Transportation » Tri-Rail into downtown Miami awaits Brightline’s action 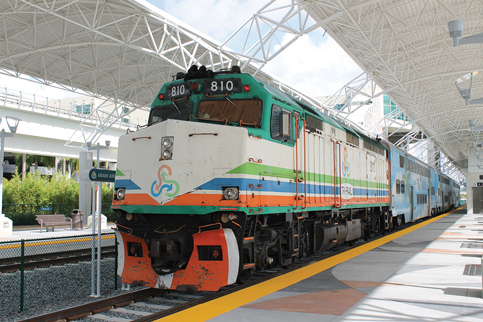 Thousands of would-be downtown commuters wait anxiously to learn when Tri-Rail trains will roll into Miami Central station, and they aren’t alone.

The South Florida Regional Transportation Authority, Tri-Rail’s parent, must wait for Florida East Coat Railway, which owns the Brightline commuter service, to have its Positive Train Control (PTC) system certified by the federal government before it can move forward.

PTC is a federally mandated safety system that must be installed and running in all US trains and along tracks by December 2020. The system Tri-Rail uses isn’t consistent with the one Florida East Coast Railway uses, but there are ways to make them interoperable.

Once Brightline’s PTC is certified, “We will apply to be a tenant on their tracks,” said Steven L. Abrams, authority executive director, in June. “We are dependent on their certification.”

Brightline hasn’t given Tri-Rail officials any indication of how the process is going, Mr. Abrams said this week. “PTC is very costly and complicated to install. We talk with them frequently and we ask, but we don’t know. I’m sure they’re working on it very diligently, because nobody wants to face the consequences of missing the 2020 deadline.”

Brightline was contacted for comment on this story, but no response had been received by press time.

In February, Bonnie Arnold, former Tri-Rail spokesperson, said many issues had been resolved at MiamiCentral, Brightline’s station. Tri-Rail has two sets of tracks there; Brightline three.

“We’ve solved the level-boarding issue,” Ms. Arnold said then. “As soon as they let us know that 90% of their work is done on the tracks, we can get in there and finish the rest.”

Rail partners have invested $70 million to establish the TriRail Downtown Miami Link, funding 26 trains and 9 miles of new rail infrastructure. The 450-person trains will provide a one-seat ride to and from downtown Miami and the West Palm Beach area, with stops all up and down the coast.

Early computer-simulated models predicted an outpouring of interest from new riders and regulars alike for the daily Tri-Rail trips. About 2,000 riders from Fort-Lauderdale and West Palm Beach would be flocking to downtown Miami on day one alone, of whom 1,000 riders are expected to be first-time passengers, those models predicted.