Advertisement
The Newspaper for the Future of Miami
Connect with us:
Front Page » Government » South Dade Transitway rapid bus service rolls ahead 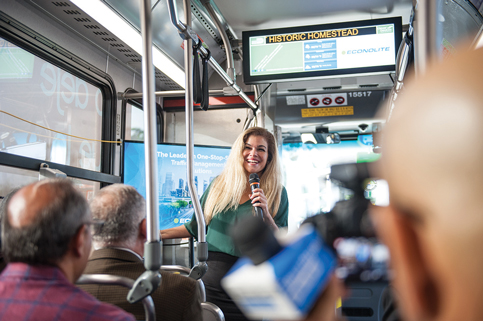 With local and state dollars committed, a shortlist of developers on hand and confirmation of federal funds due early next year, Miami-Dade’s upgrade of the South Dade Transitway for rapid bus service is rolling ahead, Transportation Director Alice Bravo said.

Ms. Bravo said the county expects an answer for its request of $100 million in federal grants by “January [or] February,” when President Donald Trump’s administration is to release its annual budget.

But even if the funds aren’t cleared right away, she said, the county will seek federal permission to hire a developer to begin construction anyway.

“We would request a letter of no prejudice so we could award the contract and proceed with implementation while we await federal funding,” Ms. Bravo told the county commission’s Transportation and Finance Committee last month. “We have shortlisted teams, released the design-build criteria to those teams and I believe the proposals are due in March, so we will be awarding that contract early next year.”

Separately, she continued, “there will be a procurement for the vehicles for the facility, and that’ll all be moving forward together on parallel tracks.”

The bus upgrade is estimated to cost about $300 million, significantly cheaper that the $1.332 billion projected in an Aug. 27 county transportation department study.

Proponents of the bus solution, like Mayor Carlos Giménez and Commissioner Eileen Higgins, said the mode would provide service similar to Metrorail at a fraction of the price.

“The capacity may be a little smaller with BRT,” Mr. Giménez told Miami Today in July 2018. “In terms of passengers, the experience they get [is] as close to rail as can be, [but] the expense in infrastructure is one quarter and the operations and maintenance is half [the] cost.”

During a brief presentation and update on the project, Ms. Bravo outlined key upgrades to the corridor, which traverses Pinecrest, Palmetto Bay, Cutler Bay, Homestead and Florida City.

The project is to include 14 weather-controlled stations, 45 intersections outfitted with crossing gate arms and traffic signal preemption, and about 10 miles of resurfaced roadway.

“That means when the vehicles pull up, all doors will open and everyone will be able to get on and off through all the doors, just like a train,” Ms. Bravo said.

Other project parts, she said, include 20 miles of fiber-optic installation, utility relocation and pavement widening, and drainage improvement at station locations.

Miami-Dade lawmakers in 2016 approved the Strategic Miami Area Rapid Transit (SMART) Plan to bring better transit to six key community corridors throughout the county. To date, only the South Corridor has secured external funding for a transit upgrade.

The transportation board late last year endorsed elevated fixed guideway with a preference for rail for the North Corridor running to the Broward County line. Members in October approved plans for a $1.9 billion Metrorail extension to satisfy the link.

That same month, the board also OK’d a $76 million deal with Brightline for an Aventura station to satisfy the needs of the Northeast Corridor, a move that enjoyed broad support on the dais amid concerns of affordability.

The board viewed potential bus service on the planned $1 billion southeastern Kendall Parkway extension of the Dolphin Expressway as the solution to the East-West Corridor conundrum. However, the state legislature’s abolition of MDX, the authority that oversees the expressway, followed by its resurrection through a court judgment now in appeal, has imperiled the development’s future.

Talks are also ongoing for a Beach Corridor solution between Miami and Miami Beach, formerly called Baylink, which is the shortest of the six routes and the target of several proposals.

Least discussed is the Kendall Corridor running from US 1 to Krome Avenue, easily the most built-out arterial roadway on the list.

“I predict that’s the last corridor to be addressed,” said Joseph Curbelo, chairman of the Citizens’ Independent Transportation Trust.

Of every project on the list, BRT on the South Corridor is probably among the least expensive to realize with federal funds, Commissioner Esteban Bovo Jr. said Nov. 14.

“This is something that is low-lying fruit that we could take care of,” he said. “Although many I know were opposed to it, [they’ll] at least see a commitment to move forward. I don’t want to add injury to insult and not do anything.”

Mr. Moss reiterated his disappointment that communities in the south were denied a rail extension but agreed that upgrading the route should begin as soon as possible.

In selecting BRT for the South Corridor, the transportation planning board added a contingency that the route would be converted for rail once ridership reached 35,000 daily passengers.

“My position,” he said, “is to now try to fast-track the development of the stations, the arms and those kinds of things and to do it such a way that every stop along the way is transferable – convertible – to rail.”