Advertisement
The Newspaper for the Future of Miami
Connect with us:
Front Page » Opinion » New cities here are inevitable, so prepare for them now

New cities here are inevitable, so prepare for them now

Miami-Dade lawmakers were on target two weeks ago when they aimed a study at the impact of new cities, but they woefully undershot the bull’s-eye.

Instead of the planned study of how added cities could impact police and fire services, it should be broadened to analyze how having every county resident living within a city could improve quality of life.

The bottom line is, the county is far too big to provide the local services to all of its residents, and every passing day county hall gets farther and farther from us as population grows. City government closer to home could serve far better.

Today, 57% of us live in one of 34 Miami-Dade cities, towns and villages, with city officials elected locally. Services and rules are geared to the exact needs of that city. County hall avoids the local issues of that 57% but meets the regional needs.

The other 43% of us, however, live in an agglomerate labeled UMSA that includes 39 populous areas that are not incorporated into cities, and all of the services and rules come from county hall. Some of those 43% live 25 or more miles from the other residents of their “community” – we use quote marks because these disparate areas can’t constitute one community. Moreover, the unincorporated areas are often divided by multiple cities in between.

That gives Miami-Dade two broad classes of residents – those who get to elect people who live nearby to run their area and thereby get big leverage over local destiny, and those who vote for only one of the 13 people who run their area from county hall and so have virtually no leverage.

It’s also not smart. Nearby officials tend to know more about local issues and to be more responsive to residents.

The other reason it’s not smart is that county leaders are torn two ways: they have to act like a massive though distant city hall for 43% of residents while at the same time functioning like a thoughtful and forward-looking regional government to plan and execute regional concerns. 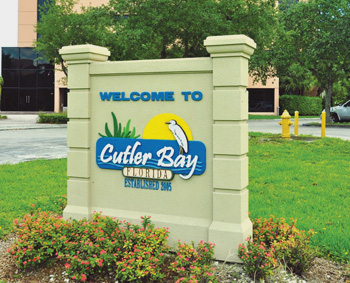 The last community to incorporate in Miami-Dade was Cutler Bay, in 2005. The town is directed from this town hall building at 10720 Caribbean Blvd., shown in 2010 photo.

Far too frequently, county hall is pulled into very real neighborhood concerns where 43% of the people live to the detriment of the major regional concerns of 100% of us. Given the structure of hyperlocal plus regional duties, inevitably potholes take precedence over sea level rise.

The problem is exacerbated as county population grows. When Miami Today analyzed this issue in 2012, Miami-Dade had more people than exactly 100 entire nations. Today, the growing county has more population than 111 nations.

If Miami-Dade were in the United Nations it would play the role of a mid-range nation, yet at county hall we’re still filling potholes.

That’s not fair to all the residents, who are not getting full attention for major issues. It’s also not fair to the 43% who have no city hall to call when they have a gripe. And it’s certainly not fair to county officials, who must straddle a range from small neighborhood concerns to vast regional decisions and policies that will determine all of our futures.

The answer is not to determine – as the newly approved county study posits –whether a single new city or town would raise police and fire tax costs for others who remain behind in unincorporated areas.

The correct question for the long term is how to do away entirely with unincorporated areas and let every Miami-Dade resident have both a very local government for local issues and a stronger county hall to plan and execute regional policy.

That basic proposition raises both issues and opportunities.

One issue is whether we’d still need county police and fire teams, not to work for the county but to serve cities, villages and towns at fair rates. While bigger cities like Miami will probably always have their own forces, smaller cities might contract with a professional force that will serve much of the county.

A vital issue is how to form cities that all have tax bases that can support local services, so that the poorest areas aren’t forever left behind.

Another issue is sharing transportation tax among all cities. The more cities, the more of the tax will be spent by cities with less to fund true regional transportation, which the tax was clearly intended to do.

Then there’s the question of whether cities that form naturally would leave behind orphan patches of county in no city at all: would existing cities be required to take them in?

Other questions would include who could initiate an incorporation and who could vote on it. Then there’s the puzzle about whether those in new cities would pay higher or lower taxes than they do today, with the answer residing in a new city hall.

All the answers require open-minded expertise. If incorporating everywhere had been easy, it would already have been done.

But major twin advantages beckon: very local governance of our own destinies while freeing the county to look in advance at regional issues that we too long have ignored until they became emergencies: rotting sewer and water infrastructure, unaffordable housing, ineffective mass transportation, and environmental pressures that include rising sea levels all come to mind. You can name more and wonder with me why we don’t get out in front on big issues before they become emergencies.

Of course, there’s no guarantee that just because we create a city government where one logically should exist that it will do well, any more than we can guarantee that a county hall divorced of potholes will actually be visionary on regional issues. Democracy is only the best form of government if the governed – that’s us, folks – actually elect good people.

No, we cannot guarantee success if we develop a two-tier system of county plus city. But we can be certain that as the county grows and regional problems do too, it will get much harder for the county to get in front of big issues if it must also be city hall for 1.2 million of our 2,761,581 residents.

Even the most fervid opponents of cityhood for all admit it’s coming. They just don’t want it during their terms in county office.

It’s like water and sewer, and transportation, and housing, and environment – rather than tackle an issue today, some want to wait for a successor to deal with hot topics.

That’s why for six years the county banned new cities, and why Cutler Bay was the last new one, in 2005. It’s why a South Dade effort for a city of 140,000 people died in commission chambers in June.

But what harm could it do to broaden a county study of incorporations to get experts’ reading of what cityhood could mean to the county as a whole?

The county commission will revolve next year, with perhaps a majority leaving through a combination of term limits and resignations to run for other offices. Shouldn’t this needed study of cityhood be ready for the new commission to act on?

3 Responses to New cities here are inevitable, so prepare for them now