Advertisement
The Newspaper for the Future of Miami
Connect with us:
Front Page » Communities » Miami-Dade heads to crackdown on RVs

Miami-Dade heads to crackdown on RVs 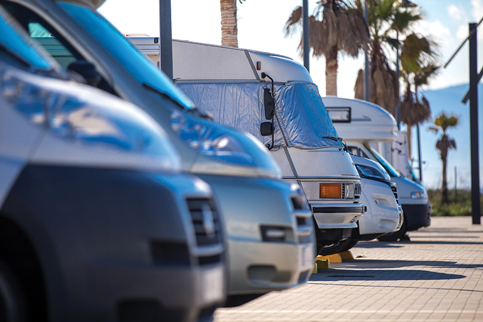 While not as ubiquitous as regular cars, vans or trucks, recreational vehicles, or RVs – motor homes and trailers with beds, small kitchens, dining areas and sometimes bathrooms – are common throughout Miami-Dade.

But according to Commissioner Javier Souto, some residents are breaking county law by living in their RVs for lengthy periods, treating them like permanent rather than temporary residences.

Now, though a resolution headed to a final vote Dec. 3, Mr. Souto aims to crack down on violators and establish a countywide registry to improve enforcement of those laws.

Miami-Dade ordinances allow one parked RV per residence “in the open, on sites containing a single-family or duplex residence,” provided the vehicles aren’t used for living, sleeping or storage.

“There is concern that some individuals may be attempting to use recreational vehicles beyond their intended purposes for permanent housing … effectively [converting them for] illegal multi-family uses,” the item says.
As a solution, Mr. Souto’s measure would direct Mayor Carlos Giménez’s office to seek “and periodically update” a list of every RV in Miami-Dade from the Florida Department of Highway Safety and Motor Vehicles and develop an enforcement strategy based on that information.

The mayor’s office would also have to outline within a year the corrective steps it took to ensure enforcement and “any logistic hurdles” it encountered.

Obtaining a list of registered RVs is easier said than done. The county can seek the list through a public information request, but Florida law protects certain personal information.

Those protections can be circumvented “under limited circumstances,” Mr. Souto’s item says, by government agencies seeking information considered vital to “carrying out their functions.”

A national crackdown on vehicular living has led to a 119% uptick in related bans in recent years, according to a report from the National Law Center on Homelessness and Poverty, which says 43% of US cities prohibit sleeping in vehicles.

“Laws restricting living in vehicles – even when a vehicle is a person’s only reliable form of shelter – are the fastest-growing laws criminalizing homelessness nationwide,” the group wrote in June. “Moreover, enforcement is costly to taxpayers, as cities typically lose money – even thousands of dollars – on each tow of a homeless person’s vehicle home.”

The new bans, and heightened enforcement of existing bans, accompany a mounting trend across the US of people living in motor homes in lieu of traditional homes amid rising housing costs.

On Nov. 13, The Olympian reported that Washington state officials were considering restricting overnight parking along a major parkway in Olympia in response to a large inflow of people camping in RVs and other vehicles in recent months.

A day later, WPIX in New York reported on a burgeoning illegal RV community under the Gowanus Expressway.

The Almanac, a community news outlet serving San Mateo County, CA, reported Nov. 21 on a young couple living in an RV in the driveway of an elderly relative. Despite each earning the city’s $15-an-hour minimum wage plus tips, the two said housing costs in the area all but priced them out of traditional accommodations.

A code enforcement officer, responding to a neighbor’s complaint, told them they have until Dec. 3 to find new housing or relocate because the RV’s presence violated the city’s nuisance ordinance.

On Sunday, The Denver Post published a similar report about a couple pushed out of an RV encampment in Lakewood, CO, after the city council banned the parking of RVs or trailers on public streets for more than two days.

The city said the ordinance responded to complaints from surrounding businesses of trash, oil and sewage being dumped by those living in 12 or so vehicles parked near the Jefferson County School District building.

3 Responses to Miami-Dade heads to crackdown on RVs