Advertisement
The Newspaper for the Future of Miami
Connect with us:
Front Page » Opinion » Cutting visitor industry funding failed, so try spending more

There are times we wish our own forecasts were wrong. This is definitely one of those times.

Last month Miami Today editorialized against the state’s current cut in spending to promote tourism, saying that it was likely to slow growth in the booming industry.

Sure enough, last week Visit Florida, whose spending had been slashed, reported that during the first three months of the cut, year-to-year industry growth was the lowest since 2010 – the last year in which Florida tourism actually declined.

In a state that rises and falls with its visitors, that’s a frightening fact, especially since the state’s current tourism slowdown comes during national economic growth – the last slowdown was in the midst of the Great Recession.

Be clear on this: tourism is still growing in Florida, just far more slowly. The 31.6 million visitors in the third quarter was up 1.2% from the third quarter of 2018. However, third-quarter growth the prior year had been a robust 5.6%.

After Visit Florida’s budget was cut, said Carol Dover, president of the Florida Restaurant & Lodging Association, “those of us that have been doing this and watching this for years expected to see numbers drop, but I have to admit not as quickly as they did,” the News Service of Florida reported.

“This is the cautionary tale we’ve been telling year after year after year,” said Santiago Corrado, president and CEO of Visit Tampa Bay, showing that Visit Florida’s funding and subsequent staffing cuts have led to the slowdown in growth.

They did: the quarter’s Florida hotel room nights – how many nights all of our visitors stayed in the state – actually fell 0.7%.

Florida House Speaker Jose Oliva from Miami Lakes, who has been trying to end all state spending for tourism promotion, has claimed that after a spending cut at Visitor Florida we’d see no tourism impact because everybody knows about Florida, so the agency is irrelevant. Now we have hard if painful evidence that, whatever the public knows about Florida, a spending cut in tourism promotion and a slowing in tourism growth coincided exactly.

As far as we’re concerned, so much for that failed test. While Mr. Oliva sees no correlation at all between tourism promotion and tourism growth, the correlation so far is 100%.

If Florida were an economics laboratory, the test to shrink tourism promotion could go on quarter after quarter to see if the correlation was merely a fluke. But Florida’s economy is not a laboratory for testing theories that haven’t worked elsewhere to see if they’ll somehow work here. The livelihood of millions of Floridians is at stake. 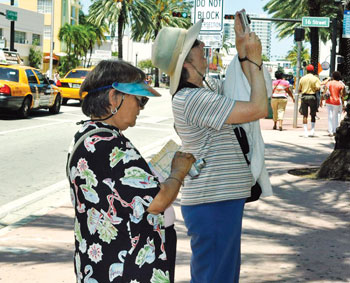 Everywhere else in this nation, more promotion of prized businesses leads to growth and less promotion spells decline. The latest figures show that the business truth of that principle holds in Florida as well.

Rep. Oliva and others in the legislature oppose state subsidizing of businesses. In that they’re correct: the state generally should not subsidize individual businesses or monopolies. That’s true especially of the millions that Florida gives each year to many professional sports teams, which do hold monopolies.

In the case of the visitor industry, however, the state is supporting the encouragement of visitors – it isn’t supporting one attraction or one proprietor or one city, but the single industry that permeates the entire state.

It’s like Wisconsin promoting the eating of cheese or Iowa corn or, for that matter, Florida encouraging a breakfast glass of orange juice, which we did for decades.

The battle over funding of Visit Florida sprang from a question of whether the agency was doing its promotions effectively or was instead pouring too much into questionable big-name efforts and spokesmen. That was a fair question: was the agency well operated?

If Visit Florida wasn’t doing the job well, however, the answer clearly was to look at its incumbent leadership – which is now gone – and not at doing away with the concept of keeping tourism strong and growing in Florida.

It’s like closing the schools because they’re not teaching children well enough. We’d never do that – we need them to get better, not to disappear. So we increase spending on schools and teachers, aiming to improve education.

The visitor industry is in the same class. Rather than slashing Visit Florida’s spending from an already insufficient $76 million to $50 million on July 1, when the agency halted many efforts to lure northern visitors, the legislature should be looking at more industry funding than ever.

Spend more in the coming legislative session to grow tourism and then monitor work to demand efficiency and quality, as we do with the schools, but don’t show the industry that as far as the state is concerned, our visitor class is dismissed.