Advertisement
The Newspaper for the Future of Miami
Connect with us:
Front Page » Arts & Culture » Preview of Jorge Pérez collection starts hunt for more space 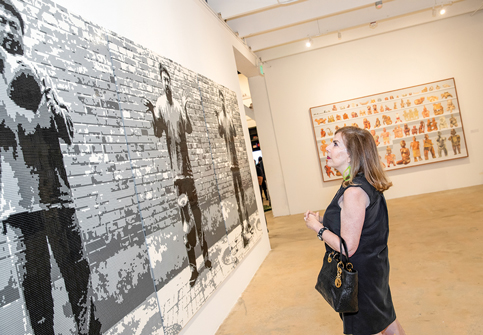 When developer and art collector Jorge M. Perez opened El Espacio 23 in Allapattah for a preview last week (ahead of its grand opening during Art Basel), it offered visitors a look into his private collection. But it also created a problem: where to find more storage space?

Mr. Perez originally bought the building housing El Espacio 23 to warehouse items in his collection, but the collection eventually took over the building.

“When we looked at the bones of the building, at the scale and the light, we decided it would have been a shame not to show works there,” said Patricia Hanna, art director for The Related Group. “But now I’m in a pickle; I need someplace to store other parts of the collection. We’re looking for another building in the same area, Allapattah, maybe a little north of where we are.”

The area, near downtown, yet with easy access to Miami International Airport and the Civic Center, is ideal she said. The Rubell Collection recently moved into the area. “I think it’s bound to become a destination” for the visual arts and artists, she said.

Reaction to El Espacio 23 has been “overwhelmingly positive,” she said. “We felt that Miami should see it first,” Ms. Hanna said. “This gives people an idea of what we’ve been up to, what we’ve been buying.”

The 28,000-square-foot space will house a portion of the Jorge M. Pérez Collection that has not been seen by the public, she said.

In addition to functioning as an exhibition space, the facility will serve artists and curators as well as hosting residencies and variety of special projects.

“This new center was born from the belief that at the core of any of the world’s great cities, is a thriving community of artists and creatives,” Mr. Pérez said in a release. “This is a project 40 years in the making, and I look forward to inspiring and challenging visitors to think beyond the scope of their personal worldviews, while also cultivating the artists and curators of tomorrow.”

The inaugural exhibition – entitled Time for Change: Art and Social Unrest in the Jorge M. Pérez Collection – “uses art to explore the conflicts and contradictions of contemporary society, as well as analyze historical events and reframe them within the present. An interest in the marginalized, the marginal and the margins (of society, of history) is what brings together the works in the exhibition,” the release continued. The show features nearly 100 works by more than 80 artists from around the world, the release continued.