Advertisement
The Newspaper for the Future of Miami
Connect with us:
Front Page » Profile » Jorge Rovirosa: Stevedores helping to keep goods flowing at PortMiami 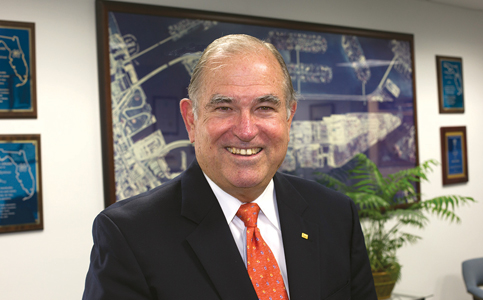 PortMiami’s existence may predate the Rovirosa family’s arrival in South Florida, but Florida’s greatest economic generator wouldn’t be what it is today without their influence.

Now under the guidance of President Jorge Rovirosa, the origins of Florida Stevedoring Inc. and its parent company, Farovi Shipping Corp., can be traced to 1937, when his father, Frank, founded the longshoring business in Havana.

As political turmoil in Cuba escalated in the years subsequent, the family left for the United States in 1960 to get out of harm’s way.

“The idea was it was going to be a temporary thing,” Mr. Rovirosa said. “I was told were going on vacation for three months.”

The move, instead, proved permanent. Within a year, Farovi Shipping Corp. began operations at PortMiami and Port Everglades.

At the time, he said, Miami was “a very sleepy port” whose limited trade lines ran almost exclusively to and from the Bahamas.

But as they did in Cuba, the family grew the company through partnerships with local entrepreneurs, freight forwarders and importers whose joint efforts created a demand for service at the port.

To fulfill that burgeoning need, the family tapped longstanding relationships with major shipping lines they’d worked with in Cuba.

“It was easy to knock on those doors, attract them to the Port of Miami to provide service,” he said.

Over the years, Florida Stevedoring grew to become the largest shipping agent at PortMiami, handling roughly 1.2 million 20-foot equivalent units (TEUs) a year. Farovi Shipping handles about 400 vessel calls a year, including all of Royal Caribbean Cruise Line’s needs at both ports.

“It took a long, long time and a lot of hard work,” he said, “but the growth of the Port of Miami has been tremendous – double-digit, unheard-of growth.”

Mr. Rovirosa sat down with reporter Jesse Scheckner. The interview, recorded by Jahmoukie Dayle, can be viewed below.