Advertisement
The Newspaper for the Future of Miami
Connect with us:
Front Page » Government » Frustrated advisors, Miami tangle over Virginia Key 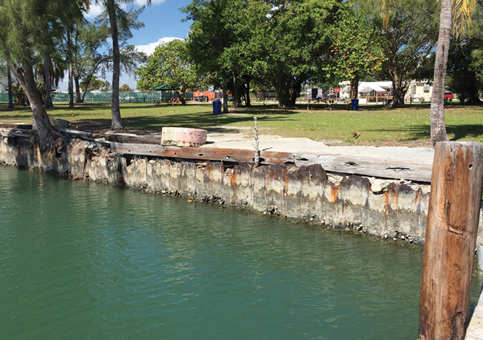 On several occasions, members have said they felt ignored by a city commission that created the body in 2016 to get a firmer handle on development planned for the city-owned barrier island.

The latest venting came at the advisory board’s October meeting, as members took one city official to task for the prolonged cold shoulder.

Acting Chairman Gary Milano voiced frustration with Steven Williamson, director of the city’s Capital Improvement Program, saying among other things that the department ignored the public’s recommendations at a workshop on the city’s redevelopment of the former Jimbo’s site on the island.

Stakeholders and members of the public said they didn’t want a new sea wall but instead desired a living shoreline, but the final plans apparently include another sea wall, he said.

Further aggravating Mr. Milano is that finished construction drawings could be presented to the board and have been requested but still haven’t been delivered for review.

Board member Peter Ehrlich also verbally tangled with Mr. Williamson but did note the department head hasn’t been around long.

Mr. Williamson said he’s been aboard about one-and-a-half years.

Robert Vernon, who said he’s been a member since the board’s creation, said: “Years later we’re still asking the same questions of staff. And it’s frustrating.”

He said he volunteered for the board “because I was scared to death of what that island would look like if we didn’t have something or some people willing to step up and oversee at least what the city’s doing.”

Mr. Vernon said board members are the stewards of the 2010 Virginia Key Master Plan.

“Our job is to make sure that the city follows the master plan as close as possible to what was passed and not do things irregardless of the master plan,” he said.

“I share Gary’s frustration along with probably most of the board. Our job is to make recommendations to the city and the staff on ideas when you’re implementing the master plan, [but] when we don’t know what you’re doing until you’re doing it, there’s not much participation. I mean, how do we participate?”

After arguing and back-and-forth, Mr. Williamson admitted his department is at fault for not providing advisory board members with long-requested project details, and said he is working to rectify that.

Mr. Williamson made a September presentation before the board on the status of the marine stadium restoration and implementation of the 2010 master plan.

At the October meeting, he intended to provide more details on the 16 projects the city has planned for the island at three locations. Beyond rebuilding Miami Marine Stadium, idled in 1992, the city plans a so-called flex park surrounding the stadium, a maritime center next door, new marinas, a black history museum at the Historic Virginia Key Beach, a kayak launch and other improvements at the lagoon where Jimbo’s used to operate, and more.

But Mr. Williamson didn’t get far into his prepared presentation before board questions and comments surfaced.

Mr. Milano began: “The seawall project at Jimbo’s, I’m a little bit disturbed by the process, because we had a workshop for the public [early in 2019] we had good attendance but we really don’t have what those folks recommended. We’re back to the seawall. We’re back to the original project.”

Mr. Williamson responded: “I don’t think we have a seawall. It’s just a stepped waterfront.”

Mr. Milano: “No clear design drawings have been provided.… We want the meat and potatoes.… You need to bring us those drawings.”

Mr. Milano: “It’s been an issue that’s really been a problem, for a long time.”

Mr. Williamson: “Gary, talk me through how we could do this. We only meet once a month.”

Mr. Milano: “When you have a workshop with the public, making recommendations, you don’t throw them away.”

Mr. Williamson: “We didn’t throw them away. I take exception to that. We took those things into consideration, very much so.”

Then Mr. Williamson again stated “we have a stepped approach,” and he said the majority at the workshop said they wanted some type of protection, and some suggested a sea wall.

“Process is important, and I do want you all to be involved,” Mr. Williamson said.

“You are a sunshine board which makes it difficult,” Mr. Williamson said. “We have to get you all together at one time, which means it has to be sunshine [open to the public, subject to notices]. So I’d love to talk through a process on how we can do that in an effective manner. At the same time we’ve got to meet our timelines, because this is a FIND [Florida Inland Navigation District] project that had to be done by a certain time. It has to be reviewed by DERM. It’s got to go to procurement, all those city processes that have to happen. So it would be great if we could figure out a synchronization process on how we could do that.”

When he brought up hiring outside experts for a full business assessment of island attractions, including a maritime center, Mr. Ehrlich quizzed the department head.

“The maritime center … we were told at the last meeting that it’s on hold. Off the table. Under reconsideration,” said Mr. Ehrlich.

“We were told it wasn’t being done–,” said Mr. Ehrlich.

“No, I didn’t use those words. I said, we’re re-evaluating its purpose…;” Mr. Williamson said. “What I told you, the cost of the facility went from its estimated cost of $7 million to $14.7 million, it became basically a Swiss Army knife so everybody was throwing different elements into it. It was supporting one thing, it was supporting another and another. It really wasn’t a true functioning facility. What we did was, we backed off of it.”

Mr. Ehrlich: “It sounds like something that should have been done six or nine months ago.”

Mr. Williamson: “We made a decision in June to stop, because it became way out of control.”

Mr. Ehrlich: “I just asked you that … at the last meeting we were told this was put on hold, and you just denied that.”

Mr. Williamson: “No, I said we are re-evaluating it.”

Mr. Ehrlich: “We’re not disagreeing at all. We just would sort of like a straight answer to questions. We can move on …”

Talk returned to a request from Mr. Milano and others to review detailed project drawings, and Mr. Milano said he was saddened by the lack of response.

“Why don’t you have these documents for us? I don’t understand … I like you, Steven, but this board has been frustrated for many, many years and this adds to it.”

Pressed on more details of the project planned for the old Jimbo’s site, Mr. Williamson said it was going forward, including a new seawall.

He agreed to present additional details to the board about ongoing projects in late November and answer questions.