Advertisement
The Newspaper for the Future of Miami
Connect with us:
Front Page » Communities » Atomik’s smiling oranges won’t dribble onto basketball court yet 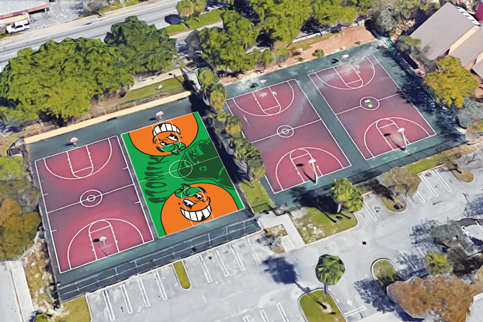 A smiling orange won’t be rolling onto a Liberty City basketball court just yet – certainly not in time for Miami Art Week.

Miami’s Arts in Public Places Board unanimously deferred to March 16 a proposed art installation to paint one of Belafonte Tacolcy Center’s basketball courts, directing the applicant to reach out to the community, district Commissioner Keon Hardemon’s office and the corresponding neighborhood enhancement team office.

The proposed artwork would be designed by Miami artist Adam Vargas, better known by his artistic name, Atomik. Mr. Vargas is known for his trademark, a smiling orange. All six proposed designs would have featured his trademark, while some designs also included his alias and gorillas.

Los Angeles based artist Sei Shimura, the applicant, stated he and Mr. Vargas would like to have the court ready by Miami Art Week and would donate a “brand new resurfaced basketball court with a custom artwork designed by Atomik.” Neither the applicant or the artist were present at the meeting Monday.

“This is a way to inspire young artists of Miami and bridging the gap between artists and athletes sharing culture [through] the universal art of [basketball],” the application reads.

While board members expressed appreciation for the donation, which would be paid for by the applicant, they ultimately said the process was being hurried and requested more community input.

“Should we be in rush, this board, to get this approved?” Chairman Francisco Herretes asked. “Or maybe this warrants a talk with the commissioner’s office first and doing this the right way and maybe it’s not for this year.”

Efren Nuñez, public art manager in the city’s planning department, stated that the installation, which is intended for five years, was not “specifically in context with the neighborhood.”

Board member Nelson Delgado said, “without any kind of feedback from the neighborhood thereof who has to actually live in it for five years, I wouldn’t feel comfortable voting on anything tonight.”

Board member Christina Cuervo said, “I think that this is really important because if we want this program to be successful, if we don’t follow procedures like this and set the right path, it’ll give the opportunity for the commissioners, the community to say why they don’t support us in the future.”