Advertisement
The Newspaper for the Future of Miami
Connect with us:
Front Page » Top Stories » Actors’ Playhouse subscriptions soar 30% 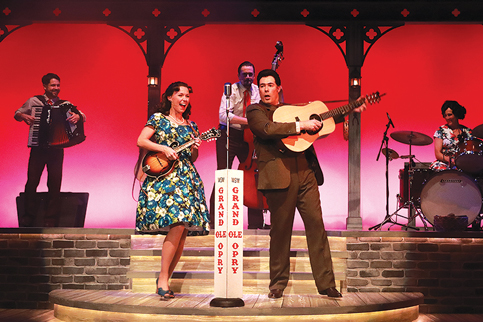 Now in its 32nd season, Actors’ Playhouse in Coral Gables is experiencing positive growth, with a 30% increase in subscribing members and a very popular season underway, said Barbara Stein, executive producing director. The first play of the season, “Ring of Fire,” has been held over for two additional weeks, until Dec. 22, she said.

“This season seems to be engaging the community, and has been very well planned out,” she said.

Plays are chosen for their story line and topics that appeal to a diverse audience, she said. “They don’t want plays that are frivolous, or that are too cutting-edge,” she explained. “They enjoy hearty plays that are thought-provoking and promote discussion.”

Popular shows have included “Memphis,” about racial tensions in the South; “Ragime,” a turn-of-the-twentieth-century story; the traditional “Fiddler on the Roof”; and “Next to Normal,” which explored bi-polar disease.

Deciding the season’s plays “is an exciting process,” Ms. Stein said. “We like to give opportunities to playwrights, including our Florida-based playwrights.”

It’s a far different situation from when Actors’ Playhouse partnered with the City of Coral Gables to bring live theater to the city 25 years ago, she said. “We wanted to develop this beautiful, historic building,” she said, referring to the Miracle Theater. “Coral Gables was underdeveloped at that time and going nowhere. There weren’t the fabulous restaurants and art galleries we see now.”

The city bought the theatre and signed a 40-year lease with Actors’ Playhouse; the lease has just been extended an additional five years, she said. The city renovated the space and three stages were installed in the theater, which now sees 150,000 visitors per year, about 60,000 of them school children.

“We have always worked in the black,” Ms. Stein said. “Unlike other groups, we’ve never gotten into problems with debt. We are a major cultural institution and No. 2 in Miami-Dade County’s grant cycle. We’ve been very fortunate to have generous support from global corporations, and we’re thankful for that.”

Moving forward, however, the theater is seeking endowments to ensure its continued stability, she said. “We’re seriously looking at endowments from individuals who are in a position to support us, so that the theater can go forward in perpetuity.”

Plans are also underway for the succession process as new leaders come to take the reins, she added. “We will make the transition of leaders from within and look for the right professionals,” she said. “We’re always toward for the future; our day is tomorrow.”