Advertisement
The Newspaper for the Future of Miami
Connect with us:
Front Page » Real Estate » 7-restaurant Riverside Miami expects to be serving in December

7-restaurant Riverside Miami expects to be serving in December 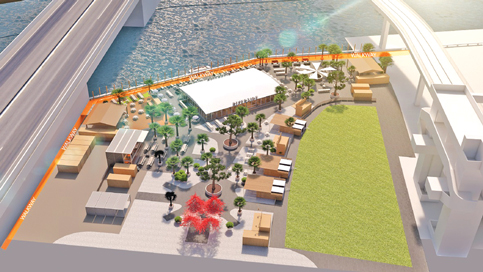 The ambitious plan to turn a barren spot of land on the Miami River into a family-oriented, open-air culinary experience is coming to fruition.

Riverside Miami LLC is working hard to transform land at 431-451 S Miami Ave. into a special venue called Riverside, with a dozen components including seven restaurants, a tap room and an outdoor event space.

Owner and developer Antonio Primo told Miami Today on Monday: “We’re pretty hopeful we should be able to do a soft opening in the second half of December, and a grand opening in January.”

The project is being touted as a welcomed experiment sure to find success by the head of the Miami River Commission, Horacio Stuart Aguirre.

He chairs the river commission, which in May recommended approval of the project and issuance of a temporary use permit from the City of Miami.

Mr. Aguirre is particularly pleased with the new venture as it will expand the ever-growing public Miami Riverwalk.

“This is another example of what we’ve been seeing in the last few years, where developers are enthusiastically embracing the river commission’s ideas of the public riverwalk,” he said.

“We did not have to twist anyone’s arm to get the riverwalk. They [developers] have come to understand what a tremendous asset the riverwalk is,” Mr. Aguirre said.

The inclusion of an improved and landscaped public riverwalk will help patrons “enjoy the river and the river experience,” he said.

Riverside is to include a side-yard path adjacent to the South Miami Avenue Bridge, which will extend from the on-road greenway and connect with the riverwalk.

The site plan also shows an internal pedestrian promenade that provides pathways to each of the food offerings.

The land is due north of the sprawling Brickell City Centre, still in the midst of its continued growth. The site is hugged by the bridge on the west and the Riverwalk Metromover Station on the east.

The area is also home to several condo and apartment towers.

The tap room will be designed to look like a microbrewery. Components described as “dressed up” containers will house some of the food and beverage options.

A farmer’s market is also being considered for the weekends.

Riverside’s sound system is to have localized speakers for ambient background music playing softer than a conversation.

The company is leasing the property, and a temporary use permit in Miami is renewable annually for up to three years.

At its presentation to the river commission earlier this year, a company representative said parking will be off-site, with patrons walking or taking a shuttle to get to the riverfront property.

The company envisions Riverside as a pedestrian-oriented destination.

The large open area on the eastern edge of the site, about 25,804 square feet, is described as a multi-purpose park for community gatherings and events like family picnics and perhaps free movie nights.

The site will be improved with about $200,000 in landscaping, including about 90% native plants.

Mr. Primo lived in Brickell 20 years and said that while he enjoyed it, the area is very dense, full of big buildings and has no trees. This lack of green space was on his mind when he said he came across the vacant riverfront site and saw a real opportunity to take over as investor and “to create something Brickell didn’t have.”

A core goal of creating Riverside is to “create a park atmosphere,” said Mr. Primo, to provide a welcoming space for everyone, families with children included.

Dozens of trees are being placed all around the property, in pots and containers of various sizes, he said.

“We’re putting a lot of benches and tables under the trees,” he added, “along with tons of plants and landscaping … to get that park atmosphere.”

Jesse Saenz, a vice president of the company, said a lot of trees and giant planters are destined for the site.

“We’ve built out their own little seating area around those trees,” he said, describing Riverside as “an intimate getaway for locals and visitors alike.”

The creation of this mini forest in the heart of the city “ties into the multi-dimensional experience” offered at this exclusive socializing property, he said.

“What I’m really excited about is we’re going to be tapping into all facets of life… This is going to be a special experience for everyone, families, children, grown-ups. There will be a lot of different types of entertainment sections, and it’ll be dog-friendly,” Mr. Saenz said.

“The trees are going to be a wonderful addition,” said Mr. Aguirre. “What they’re really doing is creating a little urban park with restaurant facilities…. In terms of lifestyle, quality of life, it is one of most exciting experiments on the river and I’m glad it’s on the river.