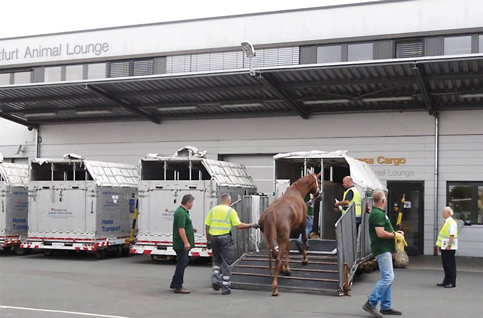 After more than a quarter-century away, Lufthansa Cargo returned this month to Miami International Airport (MIA) for weekly freighter services from Frankfurt. The cargo: horses.

Germany is MIA’s top European trade partner by value, with imports and exports between the two markets last year reaching a joint value of $2.2 billion, according to a Nov. 6 Miami-Dade County news release that announced the air freight carrier’s resumed service here.

And there’s room for even more growth, said Norbert Pahlsmeyer, director of sales and handling for Lufthansa Cargo in Florida. But at least through the first quarter of 2020, the company’s focus is on bringing horses to the Sunshine State to escape the frigid European winter.

“Horses from all over Europe – very expensive show, jumping and race horses – are spending the winter in Florida and taking part in tournaments,” he told Miami Today. “They spend time in the warm Florida sun and then return in March to Germany and Europe.”

Once they land at MIA, the horses will travel north to the Wellington Equestrian Center in Palm Beach County. There, they’ll participate in the Winter Equestrian Festival, which this year runs from Jan. 8 to March 29, according to Discover the Palm Beaches, the county’s tourism marketing corporation.

“We can maintain the stop here, not just the seasonal service, inbound to Miami, exporting back to Germany and our worldwide network throughout Europe, Africa, Asia and South America,” he said.

Lufthansa’s establishment of direct freight service to South America, he said, is what prompted the company to discontinue its cargo-only activity here more than 25 years ago.

“It’s always a question of where we make the most money,” he said. “We usually use the largest gateway, but we’re not actively taking part in the gateway to South America.”

Miami-Dade County officials are optimistic that MIA – the No. 1 airport in the nation for international freight, which generates nearly $32 billion annually in business revenue – has much more to offer Lufthansa Cargo than when the carrier last operated here.

“We appreciate Lufthansa for choosing to expand its operations at MIA with cargo-only service,” said Lester Sola, MIA director and CEO. “We expect them to see continued success on their new Miami cargo route.”

Mayor Carlos Giménez, sharing similar sentiments, remarked on the benefits of having both the cargo and passenger arms of the company here together again.

“Our community already benefits from the daily world-class passenger service Lufthansa provides,” he said. “We look forward to the additional economic impact its cargo service will have on our community.”