Advertisement
The Newspaper for the Future of Miami
Connect with us:
Front Page » Communities » Miami Beach waterways restoration flowing ahead 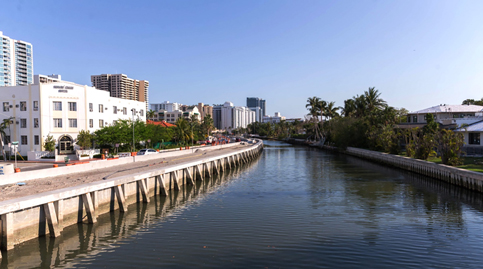 The Waterway Restoration Project for the City of Miami Beach is finally funded and moving steadily through an exhaustive planning and permitting process.

City officials report that the entire process may set construction commencement out five years from now.

The Waterway Restoration Project is one of 57 projects receiving G.O. Bond funding, approved by voters in November 2018.

“The total budget of the project is $6 million and the scope of work includes dredging contaminated waters and removing invasive species along the shorelines of Biscayne Point and the Collins Canal, where sedimentation over time has caused these areas to be unnavigable,” said Maria Hernandez, the program director for GOB projects, in an email to Miami Today.

“The planning and permitting process is extensive for this work, so construction is not planned until approximately YR 2025,” she wrote.

Elizabeth Wheaton, the city’s environment and sustainability director, told Miami Today that the mayor and city commission approved up to $250,000 for fiscal year 2019-2020 to fund the design and permitting for the Waterway Restoration Project undertaken to improve passage via the Biscayne Point and Collins Canal.

It’s a big issue for residents, as reported by the Biscayne Point Homeowners Association, and has persisted for 20 to 30 years.

The majority of the Biscayne Point Waterway is in dire need of dredging, according to the association. About two 30-foot sections, or 60 feet total, are navigable compared to the rest of the island.

This summer homeowners celebrated the decision to fund the necessary planning and permitting, after waiting nearly three decades for sediment removal.

Lack of eligible funding is blamed for years of delay. The Florida Inland Navigation District, or FIND, is the most common funding source for dredging, but grants can only apply to areas that historically have been navigable waters. The fact that Biscayne Point Waterways and Collins Canal are man-made exclude them from the organization’s funding eligibility.

When city leaders and officials began putting together their wish list of projects as part of the general obligation bond, the waterways project rose to the top.

After this summer’s funding vote, the city administration planned to conduct a waterway survey, updating the dredging analysis last conducted in 2003, obtaining permits to dredge the necessary areas, and mitigating any potential seagrass critical habitats.

The process will restore navigation conditions to Biscayne Point Waterway and Collins Canal. The project costs the city $6 million, and bonds are to be issued in the fiscal year for 2022.

The city is to conduct a bidding process next year to find a contractor to manage the study. The first step of the study is to understand where sediment accumulated the most and then brainstorm a plan to remove the sediment in those areas.

Design and planning is expected to take two years.

The long-term goal for city officials is to understand how to maintain municipal waterways and periodically provide upkeep to those areas.