Advertisement
The Newspaper for the Future of Miami
Connect with us:
Front Page » Top Stories » Half-dozen Virginia Key city projects in flood zone 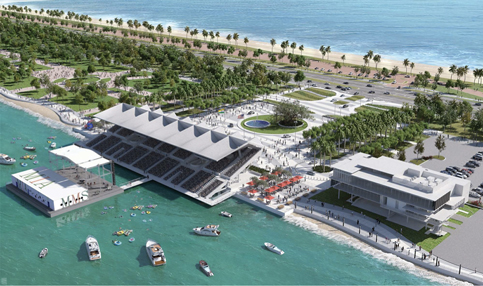 Virginia Key is almost entirely in the flood zone, and the City of Miami ought to consider these low elevations as it undertakes more than a half-dozen projects on the island.

“Flooding is occurring,” Ms. Troxler said regarding the barrier island, showing the result of a King Tide.

The city owns most of the island and plans many major projects there including restoration of Miami Marine Stadium – closed after 1992’s Hurricane Andrew – a flex park, a new maritime center and more.

The island’s low elevations need to be considered as the city formalizes plans for its property, she said.

The island is vital, with its link to Key Biscayne via the Rickenbacker Causeway, and other important components like the Miami-Dade County waste water treatment facility.

“It would be important to know all the elevations of all the assets on the key,” she told the board, including marinas, beaches and other recreational facilities.

Referring to one image in her presentation, she said: “This is a map of the projects, new or in the pipe, that were shared with us. All of the design professionals are encouraged to use [a regional compact’s] 2015 projections [of sea level rise], to be included in the language for all RFQs [Requests for Qualifications] and RFPs [Requests for Proposals].”

It will be vital that city planners consider current flood risks and the potential level of water far into the future, she noted.

“It is important to work to incorporate that information into designs to ensure those projects are reducing the vulnerability of the multiple assets that are on Virginia Key,” Ms. Troxler said.

“Also, I’m an ecologist and always thinking about natural systems, but they do have some function outside of recreational opportunities,” she said.

An example is plantings of mangroves, which help buffer the island from storm surge impacts and would “also reduce vulnerabilities of your build-outs,” she said. One city project is mangrove restoration near the waterfront stadium.

“The way we have designed and managed human and environmental systems in the past will not work for the future,” Ms. Troxler explained.

“Proactive and adaptive design for management of risks posed by climate change can protect and enhance the ability for our human and natural systems to adapt and thrive. Each new project can contribute to this goal,” she said.

“We all understand that climate change is no longer just an environmental issue. This is something that transcends our society, affects every aspect of our society, from our economic prosperity and growth, social equity and fundamentally our quality of life,” she added.

“So we know that this is not just an issue associated within Miami nor just Virginia Key or Florida,” she said. “Climate change and its impacts, particularly in the context of sea level rise, is something that affects many coastal communities across the US as well as across the world. And it’s not just a coastal issue.”

“As sea level rise continues to increase, we’ll see a greater extent of invasion, as well as frequency of events particularly associated with tidal flooding … and for South Florida, there are a lot of implications for this … impacts on our natural and built environments, influences on our drinking water, and more.”

Ms. Troxler also mentioned what she called “the triple whammy effect” made worse by rising seas.

What’s Miami doing about sea level rise and reducing impacts of flooding? Ms. Troxler’s presentation itemized some actions under way at the city level, including:

■Member of the Greater Miami and the Beaches 100 Resilient Cities program, and co-released the GM&B Resilience Strategy.

■Employing a Chief Resilience Officer since 2016, and creation of the Office of Resilience and Public Works.

Ms. Troxler’s research focuses on wetland ecosystems ecology, and informs management and restoration of coastal and freshwater wetland ecosystems. She is also the project collaborator and working group co-lead in the Florida Coastal Everglades LTER program.

She is the director for science of the Sea Level Solutions Center. The center’s work is to advance knowledge, decision making and actions toward mitigating the causes and adapting to the effects of sea level rise.