Advertisement
The Newspaper for the Future of Miami
Connect with us:
Front Page » Government » Coral Gables puts off trolleys expansion to await a grant

Coral Gables puts off trolleys expansion to await a grant 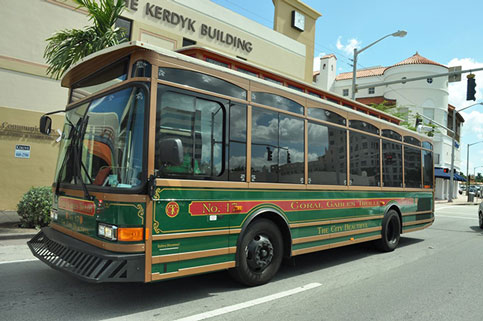 In an apparent reversal that he says might save the city money, Vince Lago, Coral Gables vice mayor, wants to hold off on adding Saturday trolley service, something for which he has vigorously campaigned.

The city commission voted unanimously Sept. 10 to launch a nine-month pilot program that would have put four trolleys (as opposed to the usual six) along Miracle Mile and Ponce de Leon Boulevard. The headway was to be closer to 15 minutes than to the seven minutes riders enjoy during the week.

But at Tuesday’s city commission meeting, Mr. Lago said it might be possible to obtain funding for a demonstration project that would put trolleys on Gables streets on both Saturday and Sunday for three years.

Mr. Lago, who is the city’s representative on the Transportation Planning Organization, said in conversations with Aileen Bouclé, that organization’s director, he learned funding might not be available.

The catch is that the demonstration project must be for new service, he said. “I don’t want to jeopardize the funding,” he said. “So I’m going to ask us to ask the residents to be patient.”

The grant application must be filed in the next few months, he said. “Hopefully, we will get this paid for and save the city money. We just need to pump the breaks.”

“There is a program coming open in spring,” said Kevin Kinney, the city’s parking director. “We should know by summer about the nature of the project. It looks like we’ll be allowed to do this. The Freebee grant is phasing out,” he said, referring to the city’s rides-on-calls electric vehicles.

When Mr. Lago first proposed the idea of Saturday trolleys in August, commissioners were supportive but skeptical about the $260,000-per-year cost. They directed City Manager Peter Iglesias to explore funding options during the city’s September budgeting.

The cost of adding Saturday service for nine months would be $195,000, Mr. Iglesias told the commission in September. There’s $114,000 in a new mobility infrastructure fund tied to construction, and “We do have some additional funding” to make up the balance, he said.

“I’m all for a pilot program, but I’m not sure it’s going to be used,” Mayor Raul Valdes-Fauli said then. “If we do this and three people ride it, it’s not worth it.”

Studies the city commissioned in 2013 and 2014 supported the need for more transit services, Mr. Iglesias said.

“The biggest bang for the buck is Saturday service,” Mr. Kinney said in September. The city receives $2 million per year as its part of the half-penny sales tax voters approved in 2002, and that amount has been increasing by 3% to 6% per year, he said.  The city spends all of that on transit and supports transit with its own funds.

Azhar Chougle, director of the nonprofit Transit Alliance, appeared before the commission in August to support the expansion of trolley hours. There are only five Freebee boardings per hour as opposed to 60 trolley boardings per hour, making the trolley much more cost-effective, he said then.

It’s true that the city spends $200,000 per year on the Freebee service, Mr. Kinney said, but a state grant pays for half of the project’s total cost. “At the end of the program, we’ll evaluate, but I can tell you at this point it’s very popular.”