Advertisement
The Newspaper for the Future of Miami
Connect with us:
Front Page » Top Stories » 52 Miami Achievers hailed as Book of Leaders is released

52 Miami Achievers hailed as Book of Leaders is released 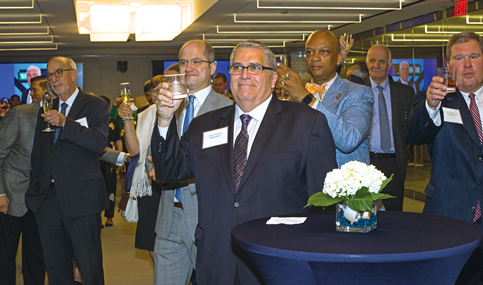 Overlooking downtown from the 33th floor, 200 invited guests last week saluted the 52 community leaders who are featured in the 2019 Book of Leaders, which compiles a full year of Achiever profiles that are a hallmark of Miami Today.

Business, civic and government leaders – many of whom were recognized as Achievers in past years and some of whom will appear in future editions of the book – gathered in the boardroom and adjacent areas of Holland + Knight law firm at 701 Brickell Ave. to mingle with this year’s honorees, whose portraits were being sequentially displayed above the podium. Nearly 1,900 leaders have been recognized since 1983.

As musicians played in the next room, awardees gathered for a champagne toast to be greeted by Miami Today publishers Michael Lewis and Carmen Betancourt-Lewis and Holland + Knight partner Jorge Hernandez-Toraño, a past Book of Leaders honoree who noted the presence of many of his partners who had been similarly honored over the years.

Honoree Adolfo Henriques of the Related Group noted that several decades ago, as a young banker with Barnett, his desk had sat precisely where the bar had been set up for the evening.

Guests left with copies of the 23nd annual Book of Leaders, the 248-page book that serves as a who’s who of Miami leaders and lists all Newsmakers and Achievers since 1983.

“We are proud to honor these stellar individuals,” said Mr. Lewis. “These leaders have done so much for this community and will do even more in the future.”

Mr. Lewis noted that the Achievers are intended to be role models for the community, inspiring others to follow in their footsteps.