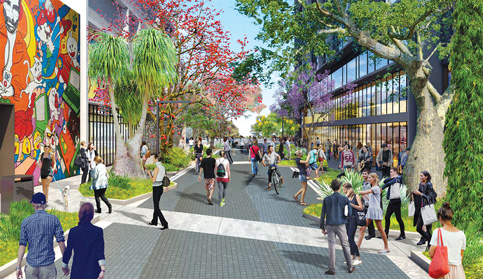 As Wynwood swells with visitors as the neighborhood becomes increasingly more popular, a plan for Wynwood’s streets is expected to be finished in the coming months.

A streetscape master plan for the City of Miami’s art district is currently in the works and could be approved and codified into the Wynwood Neighborhood Revitalization District plan as soon as March, according to Albert Garcia, the chair of the Wynwood Business Improvement District (BID). The master plan is expected to be ratified by the (BID) before the end of the year and go to the city commission afterward.

As Wynwood has transitioned from an industrial warehouse district to an arts district and has now expanded to include multifamily neighborhoods, Mr. Garcia says there is a need to address the increasing influx of people visiting and living in neighborhood.

“The impetus for this plan was to create a common set of goals and vision for what the neighborhood should become,” Mr. Garcia said of the streetscape master plan.

With the increased popularity, there are concerns about whether the street infrastructure can handle the rising foot and street traffic. He said that on Halloween, around 100,000 to 120,000 visitors came to the neighborhood.

“There’s a lot of things that are a part of this, it’s not just beautification,” Mr. Garcia said. “It is also to keep it safe.”

Last year, the city commission approved a proposal from ArquitectonicaGEO for the creation of the Wynwood Streetscape and Street Tree Master Plan for $615,140.

Among the most touted changes that would come to Wynwood is a Dutch concept of pedestrian-primary, bicycle-friendly shared streets known as a woonerfs. The Local Office, a Brooklyn-based firm that designed the streetscapes for Miracle Mile and Giralda Plaza in Coral Gables, was awarded a contract for the blueprint of a woonerf on Wynwood’s Third Avenue from Northwest 25th to 29th streets for $392,900.

The plan for the Third Avenue woonerf would include closing one traffic lane and making the curbless street one way traveling south. The street would be revamped with street furniture, native plants and trees, lighting fixtures and other features.

Farther out are efforts to have more transit come into Wynwood. The Florida Department of Transportation conducted a corridor planning study of the 17-mile stretch of I-95 that runs through Miami-Dade.

The refined planning concept from the study includes a potential interchange providing I-95 access to Wynwood, as well as Allapattah and the Health District via Northwest 32nd and 29th streets. The proposed interchange is part of an overall corridor concept with an estimated construction cost of $2.5 billion. Four separate studies will be performed, with a project development and environment study that would address the area of the potential Wynwood interchange expected to begin in January 2022.

Another possibility is Tri-Rail station at the intersection of Wynwood, Midtown, Edgewater and Overtown. The Wynwood Bid and property owners have advocated for the station.

On Nov. 1, County Commissioner Xavier Suarez, Miami Mayor Francis Suarez, and members of the Miami-Dade Transportation Planning Organization gathered at Miami City Hall to discuss the possibility of the station, where a presentation by Wynwood stakeholders made a case for the station.

In 2015, The city’s Planning and Zoning Department worked with the Wynwood BID to establish the Wynwood Neighborhood Revitalization District. The plan saw an overhaul of the district’s zoning and land use map that encourages small-scale development.

The goals of the district are to preserve the industrial and artistic character of the neighborhood, better pedestrian experiences and promote diverse housing options and fund public open space and centralized parking.