Advertisement
The Newspaper for the Future of Miami
Connect with us:
Front Page » Real Estate » Office projects and tenants migrate to Wynwood 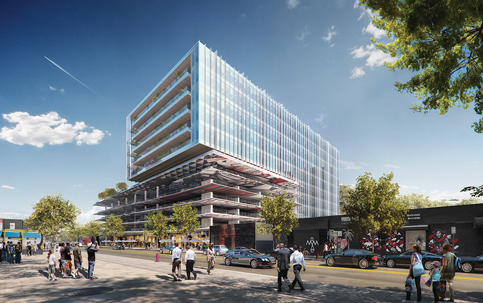 Not once in its entire history, first as an industrial area and then as an edgy mecca for art, food, and entertainment, has Wynwood had purpose-built office space. Until now.

No fewer than four properties incorporating office space have been delivered within the year or are under construction.

Late last year, Goldman Properties debuted its Wynwood Garage, which features 30,000 square feet of offices along with 428 parking spaces. WeWork, the national co-working firm, signed a lease for the top floor in February and is now set up there.

Cube Wynwd by RedSky Capital, opened this spring, bringing 86,000 square feet of class A office and retail space to the market.

545 Wyn is set to open in mid 2020 and is being developed by Sterling Bay. It will feature 298,597 square feet of creative office and retail space. The design and architect firm, Gensler, recently signed a 10-year lease for a 13,456-square-foot space.

“After seeing their space in New York’s meatpacking district, we couldn’t be happier about welcoming them to the building as our first tenant,” David Peretz, founder and managing principal of East End Capital, said of Live Nation Entertainment. “So far, we’ve seen a lot of interest from technology, advertising, marketing and innovation companies looking for class A office space in a neighborhood where employees can live, work, eat, and play. [Tenants can now find] brand-new office space with high ceilings, boutique floor plates, both private and shared outdoor space, and on-site parking,” he said via email.

“Office tenants are migrating to Wynwood because the district is such a vibrant area in the urban core of Miami and is recognized globally as a premier destination for art, innovation and creative enterprise,” he said. “Within a two-minute walk of the Annex, tenants [have multiple food and beverage options]. With more than 400 unique businesses, the surrounding neighborhood is one of the Annex’s best amenities. In today’s market, we’ve seen tenants increasingly prioritize location over other offerings. The location doesn’t get better.”

Demand is strong and rates (in the high $50s per square foot) are comparable to Brickell’s, he said. “The biggest and best names in tech have been touring lately, validating our thesis that the Wynwood neighborhood is attractive to firms focused on retaining a best-in-class workforce. Creative tenants want to cluster around other like-minded firms, so it’s exciting for us to see the expansion of the market,” Mr. Peretz said. “Tenants who are looking for office space in Wynwood are coming from other submarkets that historically catered to a creative class of tenants, including Miami Beach and Coconut Grove.”

“We’re finding that Wynwood resonates with everyone, from corporate America to local office tenants,” said Stephen Rutchik, Colliers-International executive managing director for office services. “There’s no tenant for which it’s not right.”

Wynwood leasing rates already better those of class A product in Coral Gables, he said. “Leases being done in Wynwood are only being surpassed by top-end product in the central business district.”

Innovative design, which includes more open space and natural light with floor-to-ceiling windows and fewer columns on the floor plate, appeal to everyone, but especially creative firms, he said. Many of Wynwood’s office buildings were designed along those lines.

That’s also the case for The Gateway at Wynwood, a 12-story, 420,000-square-foot class A office building at North Miami Avenue and Northwest 29th Street, for which Mr. Rutchik is to be the leasing agent. It is set to rise on a large site near the one on which a Walmart store was proposed but ultimately shelved. Ground for the office tower is to be broken soon.

“It will provide a grand entry into Midtown,” Mr. Rutchik said. “This cements the corner as the heart of the area. We’ve seen a lot of interest from potential tenants, and that’s significant because there’s not even a shovel in the ground yet.”

“Wynwood is poised to become Miami’s future creative technology hub as the city’s broader technology landscape continues to grow,” said Scott Sherman, co-founder and managing principal of Tricera Capital, a partner in a planned Wynwood mixed-use development that will include a significant office component.

“Wynwood can serve that type of tenancy because it can deliver the modern office product such companies are accustomed to, while more mature submarkets like Brickell and downtown Miami have older office stock,” he said.

“There are parallels to Chicago’s Fulton Market neighborhood, which is increasingly attracting technology companies like Google and creative office tenants,” he said. “For instance, Sterling Bay was one of the early movers in Fulton Market.”

“We should see a slew of companies announce plans to move into Wynwood,” Mr. Sherman said. In addition to Live Nation’s lease, “Numerous reports have indicated Spotify wants to establish a Latin American headquarters in the neighborhood.”

“We’re seeing office tenants that range from small businesses to multi-national corporations,” said Albert Garcia, chair of the Wynwood Business Improvement District and a principal of Wynwood Ventures. “They’re drawn by, and draw energy from, the dynamic neighborhood. Their employees want to be here. In this day and age, we all want to live in close proximity to where we work. And employers want to retain employees.”

Wynwood hopes to have another draw soon: negotiations are underway for a Tri-Rail station on the eastern part of Northwest 29th Street, he said. If it comes to fruition, that should increase its appeal not only to people who live nearby, but also to residents of the outlying suburbs.