Advertisement
The Newspaper for the Future of Miami
Connect with us:
Front Page » Top Stories » NFL kicks ahead funding for lighting Baywalk 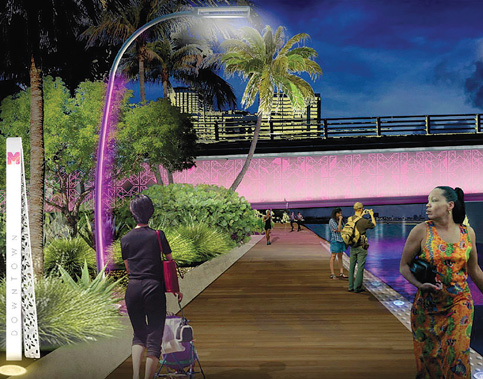 Directors of Miami’s Downtown Development Authority voted unanimously to allocate $643,371 to install LED lighting in portions of Bayfront and Maurice A. Ferre parks, but $600,000 of that money will come from the National Football League and the City of Miami.

And, in hopes of having the project completed before Super Bowl LIV festivities kick off at the end of January, they voted to waive competitive bidding so that a project manager and lighting manufacturer could be hired.

“This is us, stepping forward and working with others to get things done,” said Ken Russell, authority chair and Miami commissioner.

It’s part of a complicated deal that began in June, when the Super Bowl 2020 Host Committee approached the downtown authority with a request for $300,000 in funding. At first, authority members balked.

But then it was decided that the authority would grant the $300,000 ($100,000 from this year’s budget and $200,000 from next year’s) but in return, the city commission must agree to turn over to the authority $300,000 it received from the NFL for a legacy project in Miami, as well as the matching funds that the NFL requires before releasing the grant. That legacy project is to be the lighting that will trace the Baywalk path as it meanders along Biscayne Bay through the two parks.

Though the game itself will be held in the Hard Rock Stadium on the Miami-Dade/Broward county line, downtown will be a significant presence, said Rodney Barreto, host committee chair, said in June. About 1.5 million people are expected to attend Super Bowl Live, a free event held in Bayfront Park, several NFL events have been booked downtown, and 15,000 hotel room nights have been reserved, many of them in the city core.

The focus on downtown is logical, he said then. “I tell people it’s a new Miami; 10 years ago, it was a ghost town, and now you see parents with kids and people walking their dogs on Biscayne Boulevard.”

The recent vote stipulates that City Electric Supply will receive up to $378,645 for manufacturing the lights, and that Coastal Systems International Inc. and South Florida Electrical Consulting, Inc. will be paid up to $264,726 for project management and installation.