Advertisement
The Newspaper for the Future of Miami
Connect with us:
Front Page » Government » Move could unlock redevelopment of Miami River marina 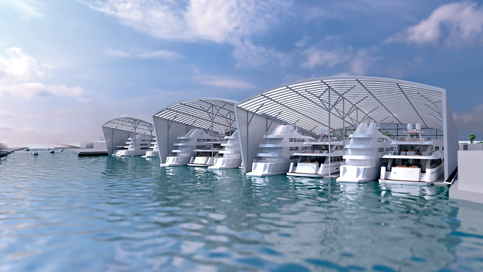 Miami has moved to downzone more than nine acres by the Miami River, a change that would reflect a lawsuit that saw a city-approved land-use change overruled.

The city’s application received a 6-1 recommendation for approval from the city’s Planning, Zoning and Appeals Board as the rezone makes its way to the city commission. The current zoning of the property at 1583 NW 24th Ave., site of Brisas Del Rio Marina, is inconsistent with the land use map, according to city staff.

Back in 2006, the Miami City Commission approved a land-use change request to allow for 12-story residential condominiums to be built at the location. After several parties appealed the commission’s decision, the Third District Court of Appeal ruled against the city, citing that the waterfront properties must be preserved.

While the land use map change reverted to its original designation after the court ruling, the zoning remained the same.

Sue Trone from the city’s planning department said that because of the inconsistency, owners of the properties are not able to pull permits, warrants and other simple things. She said the zoning change would restore the property owner’s rights.

“It was our responsibility to change the zoning atlas and we forgot to do it. Today this is deferred maintenance on our zoning atlas,” she said.

Though all the zoning of the nine acres currently allows for residential use, the land use designation of industrial that applies to 7.19 acres prohibits residential units. Those acres would go to a waterfront industrial zoning, while the remaining 2.25 acres would allow for limited mixed-use and multi-family residences.

Attorney Iris Escarra, representing Brisas Del Rio Marina, said the property owner has been unable to redevelop or improve his marina because of the current deadlock.

At a 2017 Miami River Commission meeting, the SeaVault project was proposed at the site. The project would consist of 45 boat slips and 45 commercial units for residential, storage or office uses. Along with the renovation of the marina, the project would include a restaurant, a public Riverwalk and a new public street where the residential units would be.

At that meeting, The Miami River Commission recommended approval of the SeaVault plans by an 8-3 vote so long as the city attorney finds it does not create a “precedent/domino effect that would have unintended negative impacts nor weakening of the existing Port Miami River sub-element in the City’s adopted comprehensive plan, and related settlement agreement, consent decree, court case opinions, job generating marine industrial businesses operating along the Port Miami River’s federal navigable channel, etc.”

Before the SeaVault project was pitched to the Miami River Commission, a project called Miami Mega-Yacht Marina had been proposed at the location of Brisas Del Rio Marina, which would have been able to house up to 16 mega-yachts.