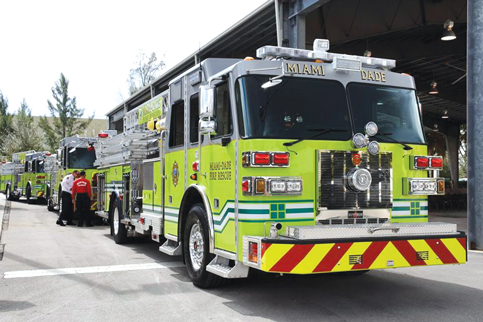 Florida motorists have paid less and less in traffic tickets over the last two-plus decades. That’s good news for residents’ wallets, but not so great for the services funded by those tickets, state records show.

For a stark example of how the decline in ticket-based revenue has affected crucial state services, one need look no further than the Florida Department of Health’s Emergency Medical Services (EMS) Trust Fund.

In 1996, Miami-Dade alone received $2.173 million from the trust, which provides funding to every county for improvements and expansions of pre-hospital emergency and life support service provided by local fire rescue departments.

This year, the amount to be awarded to all 67 counties in the state totals just slightly more than that – $2.175 million – and just seven counties are to receive more than $100,000.

Funding for the trust comes from surcharges on traffic violations: $5 from fines for reckless driving, $5 for crashes involving property damage, $25 for driving or boating while under the influence of drugs or alcohol, and a 7.2% cut of all civil penalties received by a county court.

Every year, 45% what each county generates for the trust through those surcharges is returned to them.

“This funding only goes toward purchasing equipment and training for our EMS division,” Miami-Dade Fire Rescue spokesperson Andrea Rudchenco said.

Since at least the mid-1990s – the furthest back Miami-Dade’s legislative records go online – there’s been a steady decline in those returns.

In 2001, Miami-Dade received less than a quarter of what it had just five years prior. By 2012, the county’s allotment fell just below $200,000. It has persistently dropped since then.

The sole reason the trust’s funds have diminished over time, Florida Department of Health spokesperson Brad Dalton said, is that statewide traffic citation revenue has gone down.

“This is the only reason for the decrease,” he said in an email. “There have been no legislative or executive decisions that have negatively impacted the collection or disbursement of EMS grant funds.”

According to Margaret Enciso, finance director for the Miami-Dade Clerk of Courts, that’s because drivers have become much more litigious.

“A lot of citizens are choosing to go to court instead of paying their citations within 30 days,” she said. “Also, there are other programs to help drivers. If you have a certain amount of citations, they’ll work with them.”

Jason Welty, budget and communications director of the Florida Clerk of Courts Operations Corp., concurred with Ms. Enciso’s estimation but said the issue may be more complicated than that.

“There are various theories,” he said. “But I don’t think anybody can give you a definitive.”

One such theory, he said, is that during the recession, police and sheriff offices across the state froze hiring. With fewer officers on the road, departments shifted their focus from enforcing traffic laws to more serious crimes, like burglary, and that change had a lasting effect.

“In county fiscal year ’07-’08, there were 4.5 million civil traffic cases filed statewide,” he said. “In county fiscal year ’17-’18, that number was 2.6 million – a 40% decrease. The agencies that are reliant on traffic tickets for revenue for their operations, they have seen a decrease in those dollar amounts available.”

Last week, Miami-Dade lawmakers approved the county’s annual application for pre-hospital EMS funds for next year, $110,426, which it will divide between Miami-Dade Fire Rescue and five municipal departments, a memo from Deputy Mayor Jack Osterholt said.

A county-by-county breakdown of EMS trust payments included with the memo shows Broward, Hillsborough, Orange, Palm Beach, Pinellas and Polk counties are the only others in the state that will get $100,000 or more.

Counteracting this downward trend, which could see counties resort to dipping into other funding sources to compensate for shrinking citation revenue, may require action in Tallahassee, Mr. Welty said.

“The way it is now, it’s automatic. They get what they get, the department can dole out grants and doesn’t have to do anything about it,” he said. “I think there’s some opportunity for the legislature to take a look at some of this stuff.”