Advertisement
The Newspaper for the Future of Miami
Connect with us:
Front Page » Communities » Balance delicate between new Wynwood residents and area 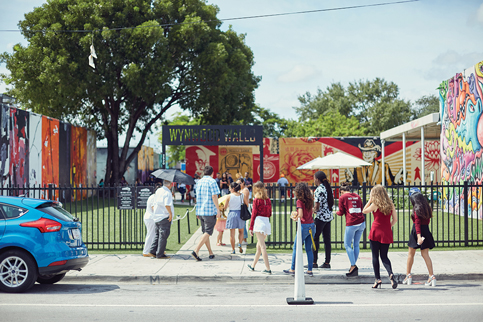 As residents begin to fill up new residential units in Wynwood, complaints about noise and loud throngs of partiers are frequently heard.

Accommodating the newcomers while retaining the neighborhood’s freewheeling and bohemian nature “is a balancing act,” said Albert Garcia, chair of the Wynwood Business Improvement District (BID) and principal of Wynwood Ventures.

“This once-forgotten neighborhood has always been dynamic, and for years it’s been a global destination for arts and culture,” he said. “From the outset, the vision was that it would become a true neighborhood. Now, with several hundred multi-family units in place and several hundred more coming, that’s happening.”

People want to live in Wynwood because it’s the ultimate work-live-play community, and part of the appeal is the many entertainment, as well as food and beverage, options that exist, he said. “We’re definitely open for business, but Wynwood was never meant to be a party town,” Mr. Garcia said. “We have the most eclectic mix of food and beverage operators in South Florida, and there are rules in place. You can’t blast music until sunrise.”

The BID has been imploring the city “to marshal resources to keep up with our growing pains,” he said. Three more code enforcement officers were recently assigned to Wynwood, some of whom will work nights and weekends, Mr. Garcia said. “This becomes a different place after 5 p.m.,” he said. The Miami Police Department has been very responsive to neighborhood concerns, he added.

“The vast majority of our businesses are compliant, but there are always a select few who aren’t. Everybody has to play by the same set of rules,” he said.

“Wynwood has been in a constant state of change almost since the beginning. As it continues to change, we want to see our businesses succeed, but to create peaceful conditions where residents can sleep in their neighborhood.”

“This is a moment we always knew was coming, a natural evolution that we anticipated,” said David Polinsky, a former BID member and principal of 250 Wynwood, one of the first residential properties in the area. His company is now involved in new residential, multi-use and hotel projects.

What’s happening in Wynwood is similar to what happened in the Arts & Entertainment District when residents began filling downtown residential buildings, he said. The Downtown Neighbors Alliance was formed and began fighting noise violations. Two of the clubs, E11EVEN and Space, installed expensive directional sound equipment that helped contain noise “and they’re doing better than ever,” he said. A third club owner didn’t want to spend the money; that club folded.

“As Wynwood becomes even more residential – which it will continue to do – there will still be room for responsible food and beverage operators,” Mr. Polinksy said. “We can do this the right way.”