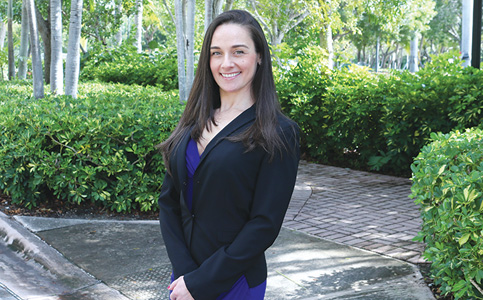 Andrea Agha’s first year as manager of Key Biscayne was a busy one. Between tackling issues impacting the village’s beaches and addressing safety needs of its schools to passing the barrier island’s latest annual budget and building safeguards for short- and long-term resiliency, the Miami native turned in long hours but made sure to maintain a happy workplace.

“We try to have fun and laugh a lot,” she said. “We work closely with our staff and council members, delivering on and monitoring projects, a lot of relations with neighboring cities and collaborations with the county and City of Miami – a lot of research and reading.”

Ms. Agha’s interest in working for the public came through her work in the private sector. She worked for an airline during the 9/11 attacks. Later, she launched a real estate brokerage firm. When the market began to decline during the recession, she adapted her business to focus on construction, remodeling and renovation. That led to a consulting job with the Miami Beach Building Department, she said, followed by a formal position with the agency, as well as a few promotions thereafter.

In 2010, Ms. Agha moved to Miami Lakes to work on emergency preparedness, permitting and, later, on code compliance and as a neighborhood services manager.
“I realized everything is budget. You need to get the funding, think strategically about how to move the objectives of the organization forward,” she said. “I approached my boss and said, ‘I need to go on the administrative side, learn the budget and finance.’”

So she did, ultimately rising through the ranks there to become assistant town manager, then deputy manager.

Last year, she reached another crossroad.

“I had two options: I could stay in Miami Lakes and become the manager, if I had the pleasure and opportunity,” she said. “But I also competed for [the job of village manager of Key Biscayne] and, when I received this opportunity, I graciously accepted. Now we’ve been here 14 months.”

Ms. Agha sat down with reporter Jesse Scheckner. The interview, recorded by Jahmoukie Dayle, can be viewed below.