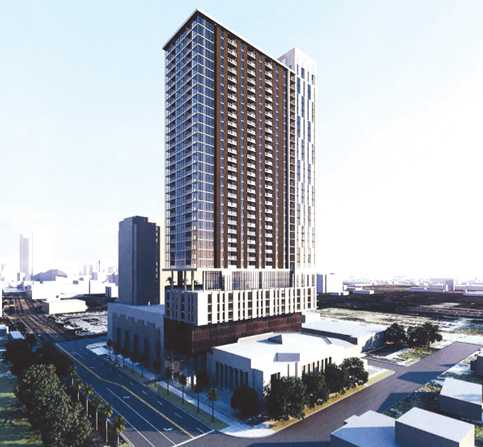 A plan to repurpose a historic church building on Biscayne Boulevard and build a new residential tower next door is back before the City of Miami with a new design.

Fifteen 1836 Biscayne LLC intends to redevelop a church at 1836 Biscayne Blvd. and construct an adjacent 40-story building for more than 360 dwelling units and parking levels to accommodate 421 vehicles.

A similar plan for the property was pitched in the fall of 2015, after the developer-owner was successful that September in gaining approval from the city’s Historic and Environmental Preservation Board for an adaptive reuse of the church as part of mixed-use residential development.

At its meeting that month, the city’s Urban Development Review Board recommended approval of a redevelopment plan that involved the church structure and a planned residential tower next door.

That plan included constructing parking levels above the church, and led some city officials to pause and voice concerns about the impact of an elevated parking garage on the historic structure.

Fifteen 1836 Biscayne LLC is back and the developer’s team is ready to proceed with a new design that includes no new levels above the church, instead incorporating parking spaces into a new podium that is the base of the residential tower.

At its meeting this month, the review board recommended approval of the latest proposal, with a couple of suggestions.

The First Church of Christ Scientist was designed in 1925 by architect August Geiger, and built on the southwest corner of Biscayne Boulevard and Northeast 19th Street.

The church was listed in the National Register of Historic Places in 1988.

Changes in the market, and the growth of ride-sharing services, has led to a new design for the redevelopment with less parking for the project.

The plan in 2015 called for maintaining the church structure and topping it with a multi-layered parking garage large enough to hold 637 vehicles.

That garage was to be attached to a new 38-story tower with 352 “residential or condo” units. The plan provided for more than 20,000 square feet of ground level retail space.

The new plan includes a tower at 40 stories, home to 364 apartments, parking for 421 vehicles in the podium of the new tower, and about 12,840 square feet of commercial-retail area in the repurposed church.

In a letter about the latest proposal, Marissa A. Neufeld, an attorney representing the development team, detailed the history of the mixed-use project including actions from 2015.

She pointed out that a previous owner of the property opposed local historic designation, but the current owner decided to preserve the resource, adaptively reuse the church structure, and incorporate a new development on the property to create a mixed-use residential community.

As part of the redevelopment process, the owner appeared before the Historic and Environmental Preservation Board (HEPB) in 2015 with an application to officially designate the resource, a 1925 Neoclassical Revival style church.

Also in 2015, the preservation board approved a Special Certificate of Appropriateness for the restoration of the resource and development of the project, including several waivers.

Ms. Neufeld wrote, “Although the HEPB unanimously approved the design for the Project, there was a significant amount of discussion concerning the placement of a parking garage cantilevered over the Resource (church), however, the HEPB recognized the importance of the adaptive reuse of the Resource and included conditions on the approval to minimize the impact of the parking garage while allowing the Project to proceed.”

She continued, “Over the past several years, changing conditions in the City, including reduced dependence on cars, allowed the Owner to reduce the amount of parking spaces in the Project, and eliminate the parking garage over the Resource.

“This modification will completely free the Resource from negative impacts and intrusions, both visually and structurally. In addition, the revised Project will require significantly less demolition than the previously approved version.

“The Owner is now able to preserve the domed ceiling in its entirety. Minor demolition of back of house space (previously a restroom) will allow the introduction of ADA-accessible ramping and an elevator shaft. Limestone veneer will now be salvaged from the portion of the western facade that is to be demolished, and the wall will be rebuilt with those materials,” wrote Ms. Neufeld.

At this month’s development review board meeting, Ms. Neufeld addressed the major changes to the 2015 plan, and introduced Jonathan Cardello of the architectural firm CUBE 3.

The church structure will be kept largely intact, said Mr. Cardello, and will be improved and adaptively reused.

The new design and layout shows the buildings “much more complementary to each other” and creating better scale within the overall project, he said.

Most review board members expressed appreciation for the removal of a parking garage over the church, calling it a major improvement to the plan.

Board member Willy Bermello did state one criticism of the latest proposal, saying he believes there’s too much going on in front of the church with a planned seating area.

“I ask you, look at that a little bit more. It seems you could be more modest along Biscayne, at ground level,” Mr. Bermello said.

Board member Ligia Ines Labrada said: “I have to say, I think this new modification is respectful of the historic feature, and great job integrating height and program adjacent to the church building.”

Board member Fidel Perez complimented the developer’s team for doing “a nice job” improving the project.

Board member Gerald Marston said the new plan is “better than the last” but added, “I still don’t think it leaves enough breathing room for the historic building on the boulevard. I strongly recommend that building be pulled away from the church building, so there’s breathing room on both sides.”

Mr. Cardello responded: “We don’t have the space for that. I don’t think it’s viable. Greater separation [would mean] a larger garage, dramatic changes. I’m just being honest with you.”

The motion to recommend approval included having the developer consider moving back the planned seating on Biscayne, creating a larger entrance to the church building.

“We will work with staff [on the seating]. We’ll find the right balance,” said Mr. Cardello.