Advertisement
The Newspaper for the Future of Miami
Connect with us:
Front Page » Real Estate » Miami Worldcenter tower beside Freedom Tower OK’d 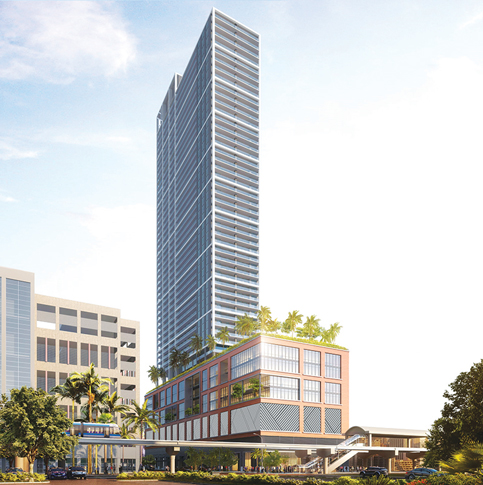 As continued construction brings the sweeping Miami Worldcenter to life in the heart of the City of Miami, the southern edge of the mixed-use project is coming into focus.

Sixth Street Miami is to include several uses in one tower and its expansive podium at 601 NE First Avenue.

The property is southwest of and adjacent to the Freedom Tower Metromover Station.

The city’s Urban Development Review Board on Oct. 16 voted to recommend approval of the project with one condition: that the developer reconsider using brick as a major material in the design.

The vote to approve the motion passed 3 to 1, with Willy Bermello voting “no.” He didn’t object to the use of brick.

Iris Escarra, an attorney representing the developer, said the Sixth Street Miami project represents the south border for the Miami Worldcenter Special Area Plan (SAP). Running along the railroad right-of-way, “we are the most southern block of the SAP,” she told the board.

Documents filed with the city identify the residential use as “Residential & Apartment Hotel, 604 total units.”

The building’s podium will have parking levels to accommodate up to 459 vehicles.

The Miami 21 zoning ordinance requires at least 4,692 square feet of open space for this project on the 1.21 acres, and the site plan will provide for 8,168 square feet.

The tower is to rise 51 stories.

Ms. Escarra told the board the very narrow site presents challenges but the architectural firm of Arquitectonica “has come up with a beautiful design.”

Raymond Fort of Arquitectonica said: “This is a very interesting junction, the south end of Worldcenter and the north end of downtown.”

It’s in an area that includes many of the older buildings in Miami, he said, and many newer structures like AmericanAirlines Arena and Virgin MiamiCentral (formerly MiamiCentral), a mixed-use railroad station development in the Government Center district.

“It is really a complex junction between old and new development in this area,” said Mr. Fort. “We are seeing a lot of activity here … it’s a very exciting location to work with; complex, long and narrow. We want to make it a very walkable site.”

He presented street level views of the proposed tower and podium. The brick proposed is a nod to the city’s history, as well as projects throughout Worldcenter incorporating arcades, Mr. Fort said.

When designing the podium levels, he said, “we like the first quarter of the century and decided on a brick treatment.”

The tower levels would have a distinctively different look, with the podium “referencing old time, then more contemporary design coming up into the tower,” he said.

Board member Fidel Perez said the building is “really simple and nice” but “I do have a problem with the material; brick in Miami. I don’t think it’s the right choice. That podium is very strong … it doesn’t feel like Miami.”

Board member Ligia Ines Labrada said the site is “definitely a tight one,” but the design is very considerate to pedestrian access.

She also referenced use of brick, noting: “I also struggle with the material choices. But it’s very elegant otherwise.”

“Outstanding job,” was the opening comment from Mr. Bermello. “I don’t have a lot of comments. I happen to kind of like the base, and realize Miami is not about brick but you now are trying to recall that history.”

The project is next door to Freedom Tower, and while the historic landmark site doesn’t include brick, using it in the new podium “does seem a gesture to history and the past, and highlights the datum of that podium. For me, it does not present a problem,” Mr. Bermello said.

The only concern voiced by Mr. Bermello is in regard to landscaping, saying “it seems there’s an overabundance of plant material in an area that is very urban.”

Ms. Labrada moved to recommend approval of the project as presented.

Mr. Perez moved to add a condition, requiring the developer get with the city planning director and revisit the use of brick, “consider an alternative material, in place of the brick.”

Ms. Labrada agreed to include Mr. Perez’s condition in her motion.

The developer is requesting one warrant and three waivers for the project to go forward.

Pursuant to the city’s zoning code, a warrant is required for the development of any new building in the Miami Worldcenter district.

The waiver requests ask for a 10% increase in floorplate length above the eighth story to 220 feet from 200 feet as the unique lot width creates a practical difficulty; 10% increase in lot coverage, again due to the unique lot configuration and the large right-of-way dedications; and a reduction in drive aisle separation, allowing the project to consolidate the vehicular drive aisles and reduce vehicular-pedestrian conflict for the rest of the frontage.

Worldcenter is a collaboration of Miami Worldcenter Associates and a team of development, design and engineering firms.

The entire development promises a mix of residential towers, hotels, retail stores, restaurants, entertainment venues and a convention center to an area hugged by AmericanAirlines Arena on the east and Virgin MiamiCentral station on the west.

Miami Worldcenter is billed as a $2 billion project out to transform several blocks of Miami’s urban core in the Park West neighborhood.

A major component of the long-awaited project is its shopping center, stretching from the FEC railroad tracks northward to Northeast Tenth Street.