Advertisement
The Newspaper for the Future of Miami
Connect with us:
Front Page » Government » Miami looks to national model to humanely stifle peafowl 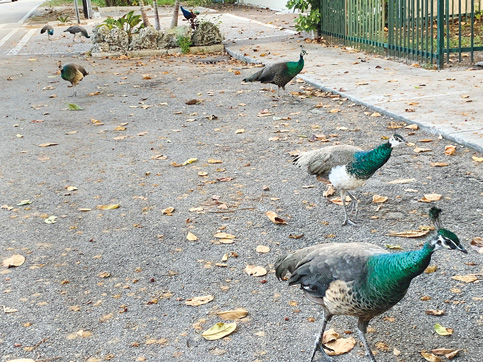 Coconut Grove is suffering from an abundance of beauty as gangs of peafowl run amok.

It’s left the City of Miami with no other choice but to fight back. Peacefully.

Commissioners last week approved on preliminary vote legislation that would see the city taking a more active role in addressing the proliferation of peafowl. (Male peafowl are known as peacocks; the females are peahens.) The legislation would call for a peafowl management plan to address the capturing and relocation of the birds.

The threat of the rise of the peafowl drove several residents to appear before the commission to express how the birds are affecting their quality of life. A doctor emoted his despair, saying that the peafowl often cross the road as he is rushing to see patients. They’re shaving off crucial time that could make the difference between life and death, he said.

Christopher Baraloto, director of Florida International Center for Tropical Botany and a Coconut Grove resident, said FIU students participating in the Tropical Conservation Internship have been monitoring the peafowl population throughout Coconut Grove for 16 months. They’ve found that there is a peafowl per every two hectares – about 600 living in Coconut Grove.

In a discussion laden with quips and biology lessons, commissioners stressed that the peafowl would be relocated in a humane manner. Chairman Ken Russell, the district commissioner of Coconut Grove and sponsor of the legislation, said northern Coconut Grove has seen a significant rise in the population of peafowl.

“The male peacocks become very aggressive because there’s so much competition. They see their reflection in darker cars, black cars, red cars, and they use their hind claw, which is like a velociraptor, and they just start tearing up the cars,” Mr. Russell said. “At that point is when I realized we need to take a responsible action here with a balance.”

Mr. Russell directed the administration to look into Rancho Palos Verdes, a Los Angeles County city that he called the poster child for dealing with a large peafowl population, as well as to work with FIU. Mr. Russell also said he will plan a meeting with neighbors to discuss the peafowl proliferation.

Commissioner Joe Carollo, a former resident of Coconut Grove, expressed his concern for the peafowl, calling them beautiful and delicate animals and reminiscing over a white peacock that once roamed Coconut Grove (though Mr. Russell said he had spotted it, Mr. Carollo said it had to have been another bird).

“I understand how some of the neighbors feel, but at the same time, this is part of Coconut Grove – peacocks,” Mr. Carollo said. “So I want to be very careful how we go about this and truly get everybody, pro-peacock, not-so-much pro-peacock, the opportunity to express their views.”

“I’d like for you to add that this does not apply to roosters or chickens,” Mr. Carollo said.