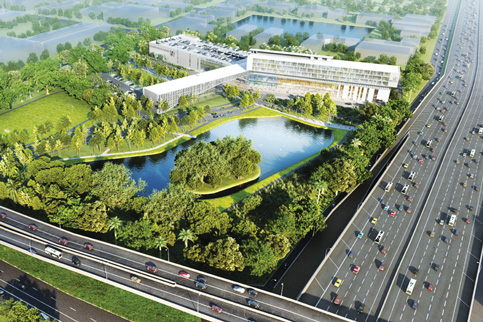 Jackson Health System is still targeting late 2020 to finish construction on the new José Milton Memorial Hospital at the Jackson West Medical Center in Doral, give or take a couple months, according to Jackson President and CEO Carlos Migoya.

“We believe it should be done around October [next year],” he said Monday. “Then we have 60 days to be operational. We hope to open doors to patients and many visitors by Jan. 1, 2021.”

Jackson senior spokesperson Tania Leets said in an email that construction crews are now at work to build the three new facilities that comprise the new hospital additions on 27 acres Jackson owns at 7800 NW 29th St.

“The campus will provide immediate access to medical care to more than 585,000 residents who live within five miles,” she wrote. “One of Miami-Dade County’s most medically underserved areas will finally have easy access to Jackson’s unmatched medical care.”

As Miami Today previously reported, the first of the three structures to be completed is a four-story, 60,000-square-foot medical office building that will house various specialties for adults and children, including diagnostic, as well as two emergency rooms, operating rooms and outpatient facilities.

That facility, which Mr. Migoya said he expects to be completed by March 2020, will be followed by a parking garage and then, not long after, the José Milton Memorial Hospital.

Although a pond on the site takes up six to seven acres, meaning buildable space on the campus is closer to 21 acres, “there’s plenty of land available to do future expansions,” Mr. Migoya said, adding that “with the growth in that area … I would imagine 10 years from now there would be bigger needs for that area.”

In terms of more immediate expansions, he continued, “that would be done right on the same tower where there’s a 100-bed hospital.”

In July, Jackson emerged from years of legal entanglements when the Florida Legislature removed the certificate of need requirement to add hospitals – a prerequisite once under the purview of the state’s Agency for Health care Administration (AHCA).

Mr. Migoya told Miami Today at the time that the AHCA approval of Jackson’s certificate of need was never a problem, as the administration had twice given the hospital the OK.

The real issues, he said, were competitors whose opposition to further development by the hospital led to litigation dating back to 2015.

In April, Florida Administrative Law Judge William David Watkins recommended that the state deny Jackson’s request to build in Doral, writing that there was no need for a hospital there.

Asked for his opinion on the judge’s assertion, Mr. Migoya said he didn’t have one.

“The only thing I can tell you is AHCA approved twice the need for not only a hospital in the area but for Jackson to be the provider,” he said. “I’d prefer to talk about the positives of the people who did think there was a need for it, and there is a need when you look at the area.”