Advertisement
The Newspaper for the Future of Miami
Connect with us:
Front Page » Top Stories » $1.9 billion Metrorail extension may run to Broward 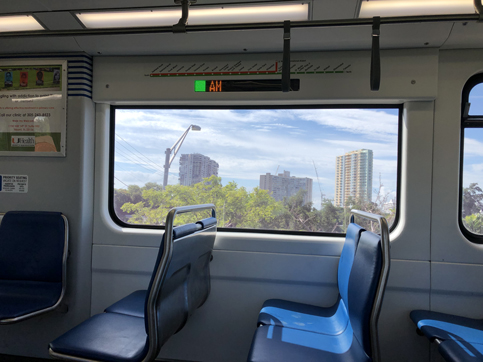 Eleven months after voting that rapid transit to the Broward County line should use an “elevated fixed guideway,” Miami-Dade’s transportation planning board today (10/31) may choose a $1.9 billion Metrorail extension.

But there’s no contest in riders. Metrorail would average 16,200 a day, including 7,500 new users, WSP said, while the other modes would serve half that or fewer.

As such, per-passenger costs overwhelmingly favor Metrorail, the only mode that would offer one-seat rides from Brickell to a future Unity Metrorail station at Northwest 215th Street.

Securing outside funds isn’t guaranteed; however, it’s more likely with Metrorail, as evidenced by two similar Los Angeles projects that recently got federal matches of 44% and 50%, WSP said.

The Northwest 27th Avenue route is called the North Corridor in Miami-Dade’s SMART Plan, which launched in 2016 to select transit for six highly congested corridors.

If North Corridor Metrorail is OK’d by the transportation board – all 13 county commissioners, nine city officials and a school board member – it would mark just the second corridor to get a new transit designation.

The board last year voted 15-7 for a $300 million rapid-transit bus line on the South Dade Corridor’s bus path between Kendall and Florida City, including a last-minute provision for conversion to at-grade Metrorail once daily riders hit 35,000.

6 Responses to $1.9 billion Metrorail extension may run to Broward